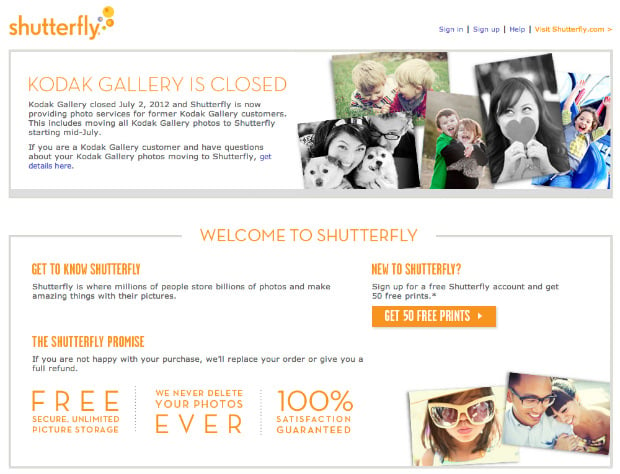 Most people already know that one of the ways Kodak tried to dig itself out of its sizable financial hole was to sell the Kodak Gallery to Shutterfly, and the service officially shut down just a few short days ago. Most Kodak Gallery users probably won’t be too upset with the move, but unfortunately, it looks like even the 2-million active users (the Kodak Gallery had a total of about 75-million) will have to go a few weeks without access to their photos as their accounts are transferred over.

In an interview with the LA Times, Shutterfly CIO Geoffrey Weber admitted that while the transition would be geared towards active accounts being transfered quicker than others, even the most active users will be waiting “a couple of weeks,” while less-active users may have to wait as long as a couple of months before they can access their photos again.

There is a page that allows you to link your account manually, but the service has been down since Monday and isn’t expected up again until sometime next week. Until then, Kodak Gallery customers will just have to be patient as Shutterfly shuttles some 5 billion images over to its servers. On the bright side, once the move is complete, previous Kodak Gallery members will be able to take advantage of 50 free prints.