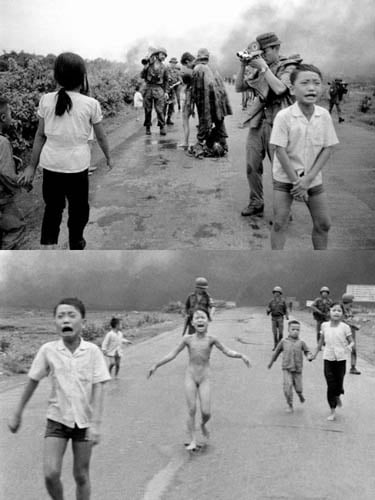 Earlier this month was iconic photo Napalm Girl‘s 40 year anniversary, and while most of the world was looking back on one of the most striking images ever taken, one photographer was reminiscing over a lost opportunity. In an article for the Washington Post photojournalist David Burnett, who was with Napalm Girl photographer Nick Ut when he took the photo, describes how he missed the opportunity because he was busy loading more film:

There was, necessarily, a moment when your finite roll of film would end at frame 36, and you would have to swap out the shot film for a fresh roll before being able to resume the hunt for a picture. In those “in between” moments, brief as they might have been, there was always the possibility of the picture taking place.

[…] I was changing film in one of my old Leicas, an amazing camera with a reputation for being infamously difficult to load. As I struggled, a Vietnamese air force fighter came in low and slow and dropped napalm on what its pilot thought were enemy positions. Moments later, as I was still fumbling with my camera, the journalists were riveted by faint images of people running through the smoke.

That’s when Nick Ut — and his already-loaded-Leica — ran forward and captured the now 40-year-old photo of Kim Phuc and her brothers running away from the burning Napalm.

When they arrived back at the Associated Press dark room him and a few others were the first to see the still wet 5×7 of the photo that would forever be associated with the horrors of war — a photo that was almost his. Fortunately, Burnett took it as a learning experience, and his photojournalism career has been one of the most successful in the industry.

But still, situations like this are bound to make you think “what if?” Ironically enough, on Napalm Girl‘s 40th anniversary, while the a digital world reflects on the famous photo, Burnett is still shooting film… still taking his chances with those “in between” moments.

Forty years after ‘napalm girl’ picture, a photographer reflects on the moment that might have been his (via Popular Photography)

The Rise of Pro Birth Photography