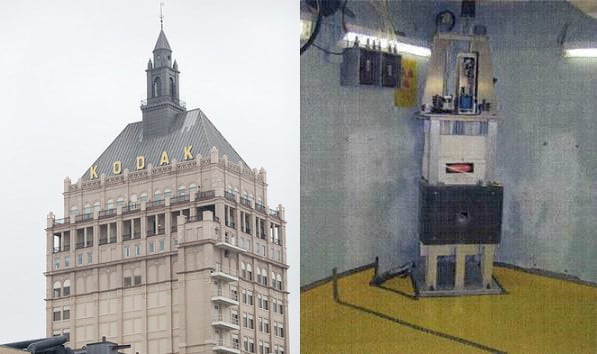 Many words and/or phrases come to mind when you think of Kodak: photography, disposable camera, kodak moment, and more recently bankruptcy. But we never thought we would be able to associate the phrases “nuclear reactor” and “enriched uranium” with the once-great photography giant — until recently that is. That’s because a few months ago a former Kodak employee let slip to the Democrat and Chronicle the existance of a little known, and never publicized, nuclear reactor hidden in the bowels of Kodak city for the last 30 years.

The reactor, a californium neutron flux multiplier (CFX), was housed in a now-vacant bunker complete with two-foot-thick concrete walls beneath Building 82 of its Rochester campus. And when it was being used it contained 3.5lbs of enriched uranium. Fortunately, nothing remotely ominous was going on there — the reactor was used, among other things, for nuclear radiography — but it still makes you wonder how the company managed to keep a nuclear reactor and a chuck of enriched uranium under wraps from an entire city from 1974 until 2006 when it was dismantled. Or more importantly, why the heck Kodak needed a nuclear reactor in the first place…

Did you know? Kodak Park had a nuclear reactor (via Gizmodo via Engadget)

Watch How the $2.79 Million Leica Camera Auction This Past Weekend Went Down