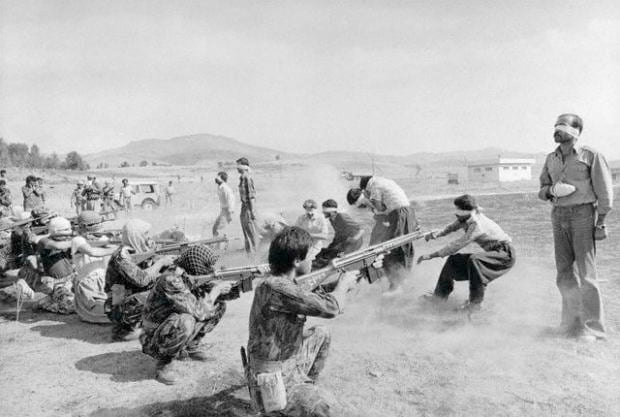 Every photo has a story, and this particular photo has one of the most interesting stories of them all — a story of anonymous fame, and famous anonymity. To this day the above photo, titled “Firing Squad in Iran,” is the only anonymous photo to ever win a Pulitzer Prize. And although the photo was taken in 1979, the photographer behind the lens didn’t receive credit until 2006.

On August 26th, 1979, photographer Jahangir Razmi learned of 11 Kurdish militants who were to be tried by a judge he knew the following day. The trial lasted all of 30-minutes, after which the men were led out to an airfield and gunned down by firing squad. Razmi captured the provocative photograph by positioning himself behind the right-most executioner.

By August 29th the photo, which had originally run as the front page of the Iranian newspaper Ettela’at, was being published by the likes of the New York Times and The Daily Telegraph; still, no one knew who the photographer was. The photo went on to win the Pulitzer Prize in April of 1980, credited to an “anonymous UPI photographer.”

Razmi finally claimed credit for the image in 2006 when he was approached by the Wall Street Journal, bringing the image back into the public eye once more.