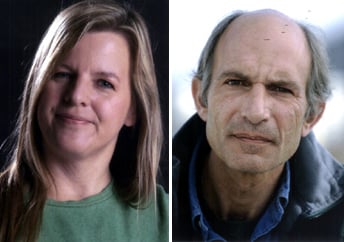 Photojournalists Mary Chind of The Des Moines Register and Craig F. Walker of The Denver Post won Pulitzer Prizes this year in photography.

Chind’s photo of a harrowing water rescue photo won as the Best Breaking News Photograph. The photo, published July 1, 2009, shows a construction worker dangling above the rapids of a dam, in an attempt to reach a victim in the water. The Pulitzer board say the photo captured “a heart-stopping moment.”

The victim and her husband had gone over the edge of the dam on a boat. Rescuers could not reach the pair with a crane. According to the National Press Photographer Association, Chind took the photo from a nearby bank crowded with rescue workers and firefighters. A worker in a makeshift rig was lowered down towards the water and managed to save the woman after several attempts. Walker won the Best Feature Photography for his intimate photo essay of a teenager, Ian Fisher, as he entered the Army. Walker documented the young man for 27 months, following him as he recruited, trained, was deployed to Iraq, and finally returned.