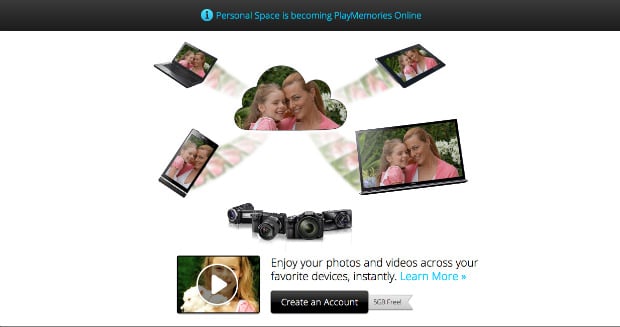 Now that online sharing of images and video has become so commonplace, Sony has decided that they too want a piece of the pie. And their new storage service, dubbed PlayMemories Online, is how they intend to claim that piece. Launched only a couple of days ago, the service is now available in the US, UK, France, Germany, Japan and Canada and offers 5GB of storage for free.
What sets Sony PlayMemories Online apart, however, isn’t so much a feature set as it is Sony-wide compatibility. Avid Sony users will definitely want to get in on the action because PlayMemories will be integrated onto PS3’s, Bravia TV’s, Digital Photo Frames, Bloggie camcorders and mobile phones. And Sony isn’t stopping at storage: PlayMemories is meant to work in concert with a new photo editing suite available on the PS3, PSVita and PSP systems.

This move by Sony is said to be the first of many similar moves to the cloud by other major electronics manufacturers. Computer and online giants such as Google and Microsoft are making inroads and improvements where cloud storage is concerned, it makes sense that companies such as Sony and Samsung (who is rumored to be releasing its own cloud service soon) would follow suit.