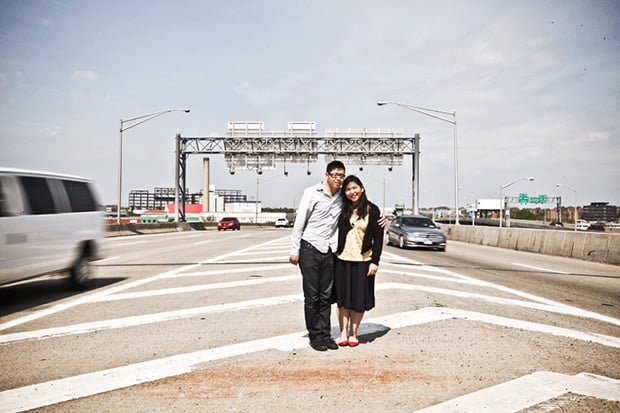 […] we headed back to queens to go to a local park instead to shoot a few more. On the way back, I said, “hey Jeddy… wouldn’t it be cool to shoot on the highway… all the moving cars…” Next thing we knew, we were risking our lives on the 678 trying to get a decent shot. All while cars were honking away at us. Life threatening, but a really awesome shot came from it! I definitely know I have a keeper — if he’s willing to brave standing in the middle of a highway with me just for a picture!

The sequence of shots captured were also turned into an animated GIF that shows the cars whizzing by. You can find the rest of the photos they made over on Chung’s blog.

(via Cynthia Chung via Doobybrain)

Update: As many readers have kindly pointed out, this is an incredibly risky (and illegal) stunt that you shouldn’t try to copy.

Image credit: Photograph by Cynthia Chung and used with permission

Nikon Recalls Some D7000/D800 Batteries Due to Overheating Issue

Gear Doesn’t Matter — Except When It Does