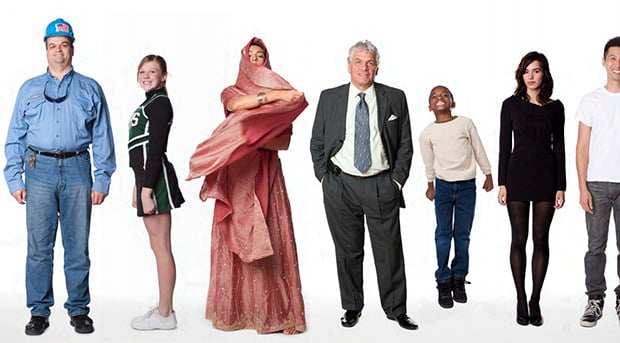 “Fake People Suck” — now that’s a tagline. In 2009 David Katzenstein and Sherrie Nickol began a fine arts project that involved asking people off the street to come to their studio and photographing them against a white background. The idea was to capture the striking diversity that’s commonplace in New York. But after photographing about 50 people — and due also to a steady drop in commissions from commercial and corporate projects — they realized the potential the project had as a commercial venture. Thus was born Citizen Stock.

Since then the project has increased in size dramatically, based entirely on the aforementioned tagline and the accurate assumption that the majority of successful stock photography involves people. The advantage Citizen Stock has over other studios is that their subjects aren’t models. Some are kids, some are grandparents, and some are even actors from around the city, but none of them are paid unless their image is selected for use.

Each week Citizen Stock sets aside one day to shoot any and everybody who would like to sign up. Clothing rules boil down to: Bring three outfits, favor bright colors, no logos and — several times in bold on their website — bring at least one solid bright color T-shirt. After that the photographers will ask questions, running the “models” though a range of emotions and capturing each individual’s unique (and decidedly NOT fake) personality.

If you happen to be in New York and want to get involved, check out their website and remember, you must bring at least one solid bright color T-shirt!

Behind the Scenes with Camera and Lens Testing Service DxO Labs

The World’s Most Downloaded Man