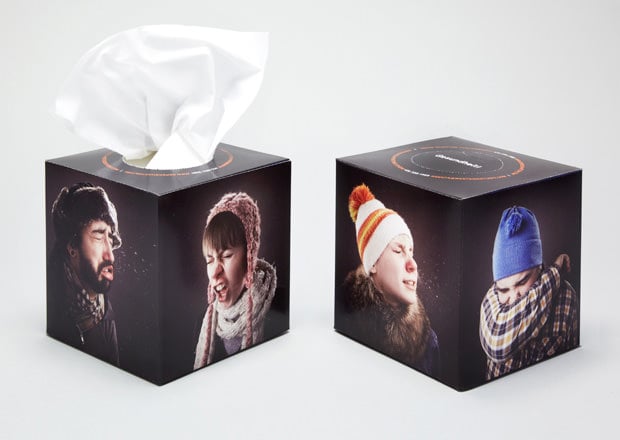 Mailers are a popular way to self-promote as a photographer, but too often the promos go directly from the mailbox to the trash can. When his studio partners suggested printed mailers a few months ago, Derek Shapton instinctively responded, “Forget it. Not doing one. Waste of money. Too bad I can’t just print some shots on Kleenex, that way they’d at least be useful on their way to the garbage…” It suddenly dawned on him that he could do just that:

The shots were conceived of and taken specifically for the tissue boxes — it was a hilarious and messy day of photos — and I consciously tried to do things a bit differently. I wanted the images to tie in conceptually with the promotion itself, which is something sadly lacking with most promo efforts, and I wanted to indulge in some careful studio lighting, something I’m not necessarily known for — you can see the full set of shots here. And last but not least, I loved the idea of an actual product, with some actual utility, that will hopefully linger for a while on people’s desks before being thrown out. Because let’s face it, that’s ultimately what’s going to happen.

Want to encourage your prospective clients to hold onto your promos? Just make them useful!

Image credit: Photograph by Derek Shapton and used with permission

Tape Transfer Portraits Show Subjects Behind Their Own Altered Photos