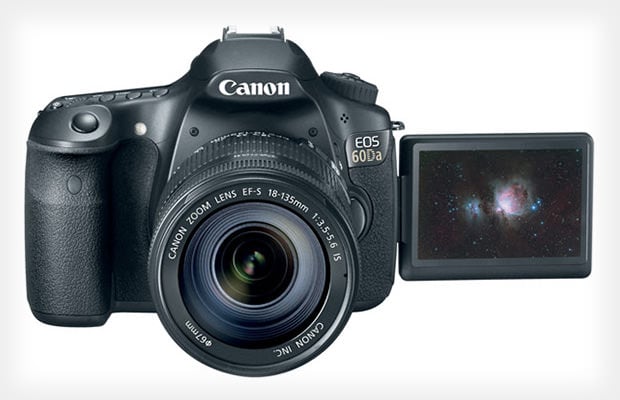 Canon has announced the new 60Da, a DSLR geared towards astrophotographers and the successor to the 20Da. So what’s different about this camera? A “modified infrared filter and a low-noise sensor with heightened hydrogen-alpha sensitivity” which allows it to capture photos of “‘red hydrogen emission’ nebulae and other cosmic phenomena”:

The improved infrared-blocking filter is a modification suited specifically toward astronomy enthusiasts to achieve a hydrogen-alpha light sensitivity that is approximately three times higher than that of a normal Canon DSLR camera. This produces a 20-percent higher transmittance of Hydrogen Alpha line, or H α wavelength, allowing astronomers to capture crisp, clear images of reddish, diffuse nebulae.

The basic specs remain unchanged from the original 60D: an 18MP APS-C sensor, 9-point AF, and a 3-inch articulated screen. Also included with the camera is a remote controller adapter and an AC adapter kit. Stargazers will be able to snag one later this month for $1,499.

A Simple Explanation of F-Stop Numbers