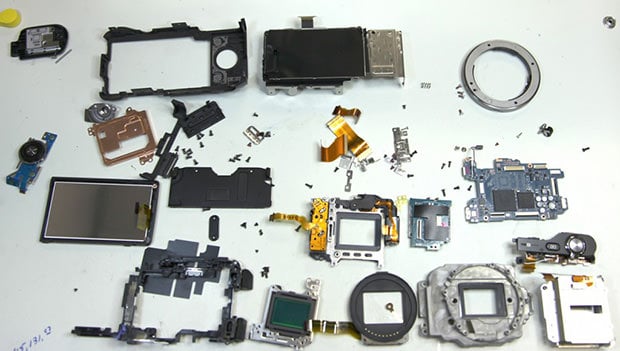 I have to say I have one of the better jobs on the planet, at least for a photography gear-head. The part I like best — well, really there’s a lot of parts I like best — but one fun part is that my job description includes: Take things apart. See how they work. Learn how to fix them.

Sometimes taking things apart is disappointing. I just don’t want to know things like “so you hold that together with a piece of Scotch tape, huh?” Some cameras and lenses look really nice on the outside, but inside there’s so much chaos I wonder if someone in the corporation is saying “We have 2 million of these parts left over, put them in something so we don’t have to write them off.”

Every so often, though, I get to see an internal design that is so elegant and efficient I think the engineers should have signed it like a painting. The Sony NEX cameras are that way. Perhaps being so small required efficient engineering, or maybe the team that designed it just was so good. Maybe the fact that there was no legacy technology that was cheap to carry over to the next model let the engineers, rather than the beancounters, make all the decisions. Whatever the reason, the layout is amazing.

I got to take apart an NEX 3 the other day (water in a camera is a bad thing) and thought some of you might like seeing the insides so I took a few pictures along the way.

First things first: if your camera looks like this, then leave it alone. I have it on good authority that the curse of Serenput I (3,500 years later and we still can’t top the Egyptians when it comes to a good curse) is inscribed in the electronic chips of every NEX camera:

We’re semi-trained, semi-professionals with another 20 of these on the shelf. If we screw it up, we’ll only have 19 left, which is probably less critical than if you screw up the only one you have and then need to ‘splain to your wife why you have to buy a new camera. Now Let’s Get to It!

It’s pretty obvious the 4 screws on the front hold the mount on, just like with every other camera. And then that the three screws under that hold the mount base, which also lets you remove the lens stop. So far just about like every other camera (although unlike some there are no shims under the mount). 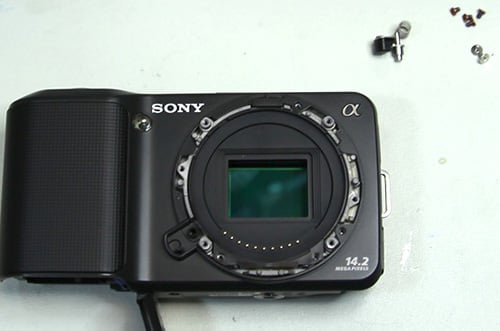 Flipping the camera over and removing 13 screws lets the back come right off. Thank you Sony #1: Notice all 13 screws are exactly the same size, which is a nice thing. A typical SLR uses 4 or 5 different size screws and you have to mark or remember exactly which screw goes where. 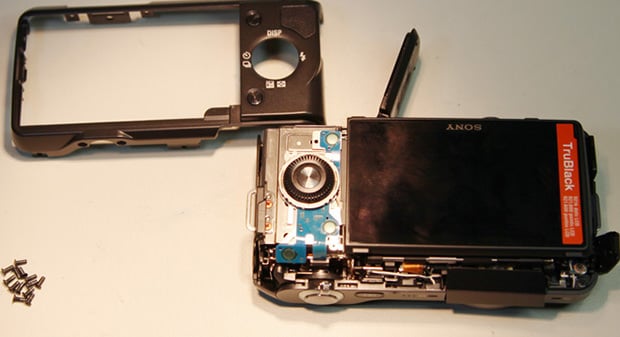 Thank you Sony #2: all the back buttons are all mounted on a single flex with one connection: you can remove and replace it in about 30 seconds should the need arise. Just the circular dial button on most cameras has 6 to 9 pieces (which I can assure you can’t be reassembled in less than an hour, 15 minutes of which is for profanity breaks, the other 45 require using a magnifying loupe which leaves you cross-eyed for the rest of the day). 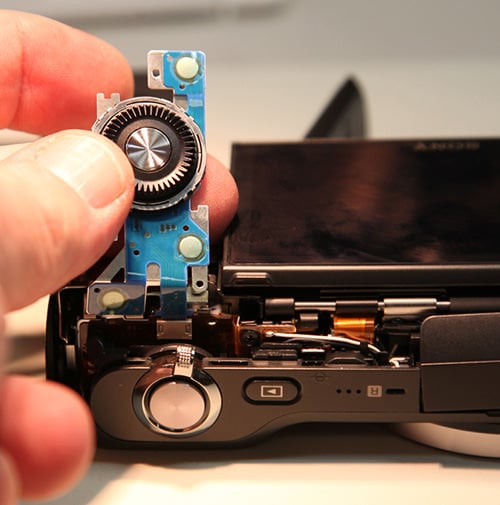 The tilting LCD is surprisingly easy to disassemble – removing a few screws removes the cover and exposes the flexes. Disconnecting those and the LCD comes free. 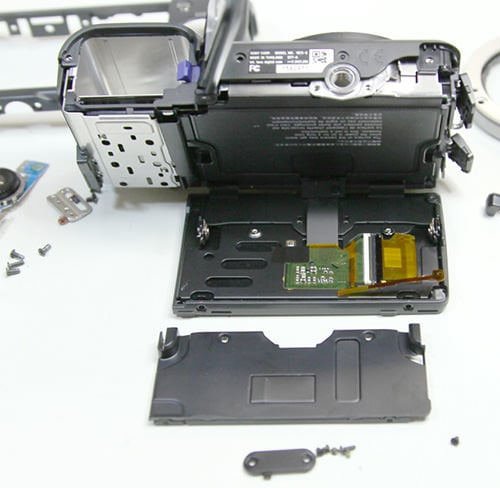 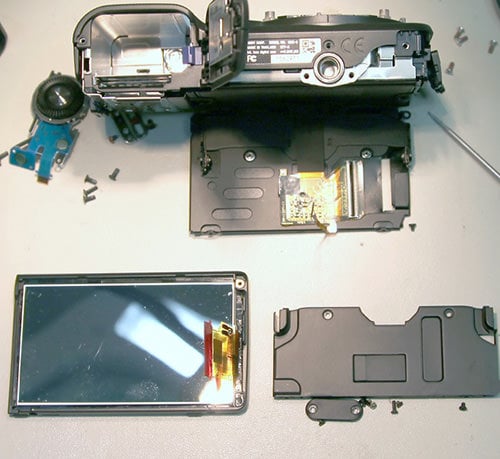 After the LCD is removed and it’s flexes disconnected, the metal shielding plate is lifted up and the circuit boards are visible. If you haven’t looked at other cameras, you may not appreciate just how clean and well laid out this is. Every flex connector comes onto the main circuit board directly: no long, winding, taped-down cables on this camera. Notice also there is significant electrical shielding over critical cables and circuit boards (I’ve removed the secondary shield over the main board already). What nice, clean design! After disconnecting the flexes and removing a couple of screws the two circuit boards and the plastic frame under them come out. Another ‘thank you Sony’: the smaller assembly is the memory card circuit. Those break somewhat frequently and on some cameras (yes, I’m talking about you, Canon 5D II) you may end up replacing the entire circuit board when that happens. On the NEX that would never be necessary. 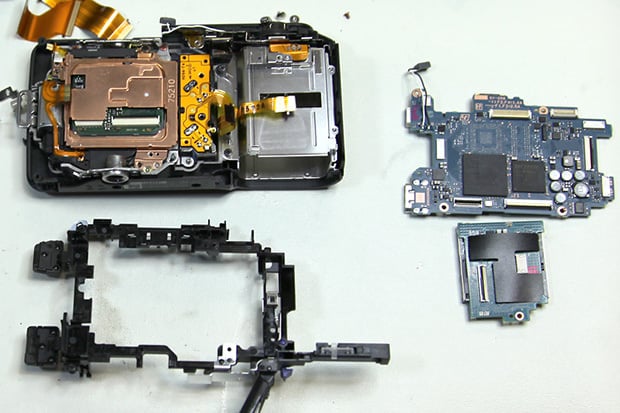 Under that pretty copper shield (another point worth considering: copper is much more expensive than aluminum) is the imaging chip. It’s held in place with 4 screws and no shims. I’m not sure if the mirrorless design with it’s close backfocusing distance means alignment of the imaging chip and lens mount isn’t as critical as on an SLR, or if Sony is able to machine to such close tolerances that shims aren’t necessary. Maybe one of you can enlighten me. 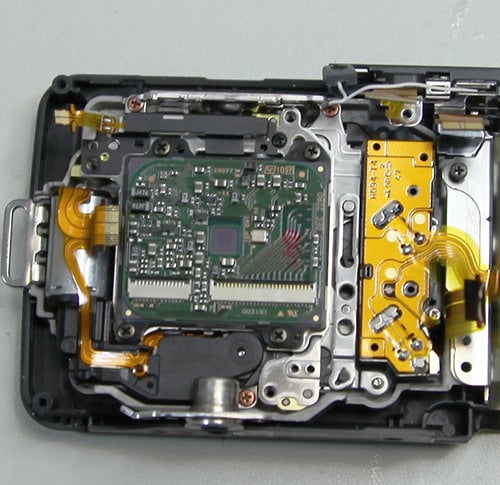 The last few assemblies are the shutter and battery compartment, again easily removed. 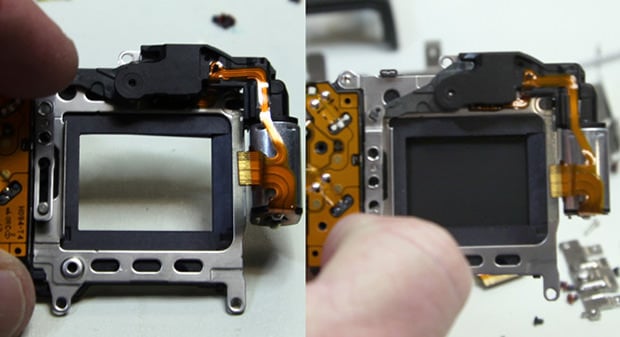 Only after they are removed is the top button assembly accesible. So note to self: don’t break the shutter button on this camera. The electronic connections on the lens mount and the metal chassis of the camera are the last pieces out (lower right in the picture below). Even completely disassembled, there are amazingly few parts to this camera.

For those of you who want to ask, no, there was no reason to put the camera back together after water submersion. We wouldn’t trust the electronics to keep working even if they did work for a while. But there are a number of nonelectric parts that are salvageable, which is why we take them apart. OK, really there aren’t a lot of salvageable parts, after water immersion. But taking them apart is fun anyway.

And to give you a bit of perspective: If I wanted to take pictures of all the parts from a disassembled SLR, I would have needed about 4 images the size of the above. I’m generally not a Sony fan, but it’s amazing how much Sony has simplified the design of this camera – not just compared to SLRs, but even to other mirrorless cameras. And props to them for doing a lot of little things that cost money but probably make the camera better and more reliable: heavy electronic shielding, gluing down the flex clamps, using copper shields instead of aluminum, etc.