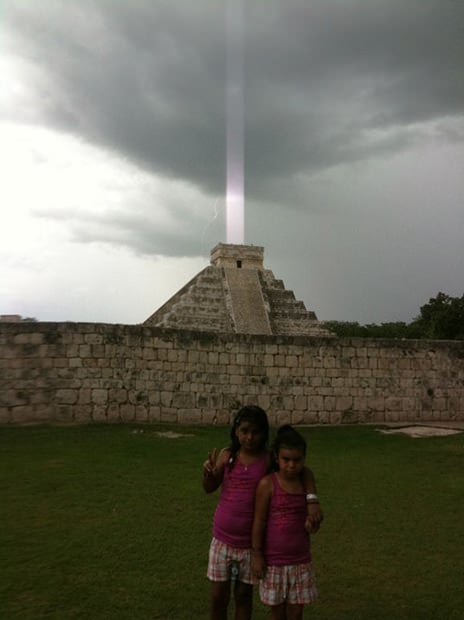 When Los Angeles resident Hector Siliezar visited the ancient Mayan city of Chichen Itza with his family in 2009, he used his iPhone to snap some photos of a pyramid called El Castillo. After snagging a lightning strike in the third shot, Siliezar was surprised to see that he had also captured what appeared to be a beam of light shooting up from the pyramid towards the heavens. Jonathon Hill, a researcher who works with NASA’s mars imagery, tells MSNBC that it’s probably the result of an iPhone glitch:

He says the “light beam” in the Mayan temple photo is a classic case of [image artifacts and equipment errors] — a distortion in an image that arises from the way cameras bounce around incoming light.

It is no mere coincidence, Hill said, that “of the three images, the ‘light beam’ only occurs in the image with a lightning bolt in the background. The intensity of the lightning flash likely caused the camera’s CCD sensor to behave in an unusual way, either causing an entire column of pixels to offset their values or causing an internal reflection (off the) camera lens that was recorded by the sensor.” In either case, extra brightness would have been added to the pixels in that column in addition to the light hitting them directly from the scene.

In an interview with Earthfiles, Siliezar notes that none of the people present actually saw any beam of light when the image was captured, which supports Hill’s explanation that it was simply a camera glitch.

(via Earthfiles via MSNBC via Gizmodo)