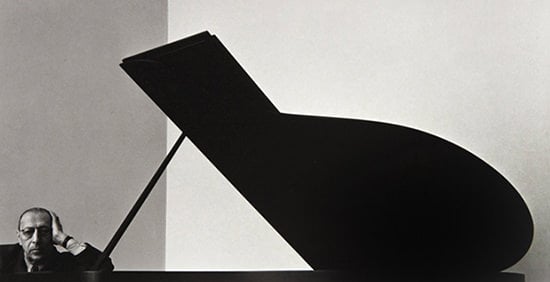 Design director Wayne Ford has written up a great piece on the career of American photographer Arnold Newman, who was in the vanguard of the “environmental portrait” movement that emerged in the early 1940s.

By this point, [Alexey] Brodovitch — the indirect teacher — was very aware of the young photographers work and his growing reputation, and began assigning him regular portrait commissions for Harper’s Bazaar. One of these assignments was to photograph the Russian composer, Igor Stravinsky, which resulted in one of Newman’s most iconic images, although at the time it was rejected for publication. ‘Sometimes, as with his famous image of Stravinsky, he would have to recreate a natural habitat artificially,’ remarks Huxley-Parlour, ‘so he expressed his essence by placing him at a grand piano in an editor’s apartment,’ creating a strong, hard, linear composition, ‘very much like Stravinsky’s music.’