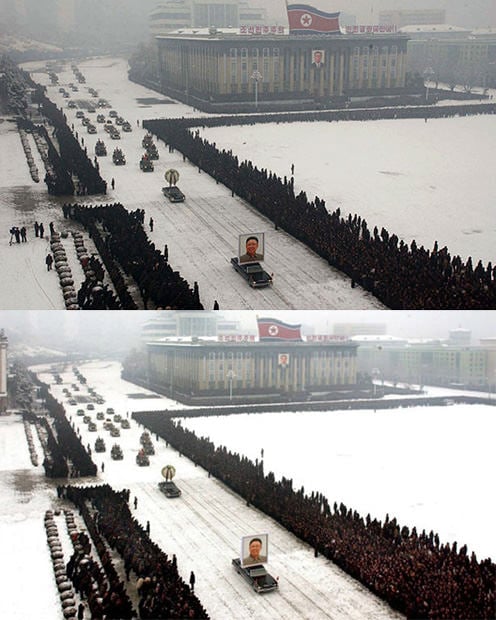 News photo agencies EPA, AFP, and Reuters have all issued kill orders for a photo of Kim Jong-il’s funeral procession released by the Korean Central News Agency, the state news agency of North Korea. The photo (above at bottom) raised red flags after a comparison with a Kyodo News photo taken just seconds earlier revealed that a number of people had vanished from the scene. The New York Times writes,

A side-by-side comparison of the full images does point to a possibly banal explanation: totalitarian aesthetics. With the men straggling around the sidelines, a certain martial perfection is lost. Without the men, the tight black bands of the crowd on either side look railroad straight.

Perhaps it was a simple matter of one person gilding the lily.

Here’s a closer look at the edited section of the photo: 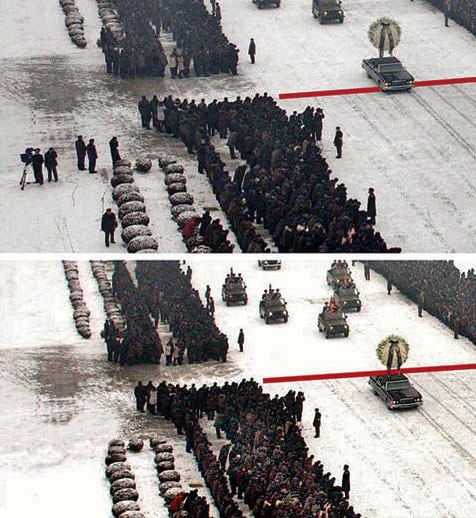 The edit clearly violates the policies of news photo agencies, but public opinion is mixed. The comments sections of news articles reporting on the story are filled with people arguing that the incident is “much ado about nothing”, and that such edits should be allowed in photojournalism as long as the meaning in the photograph isn’t changed.