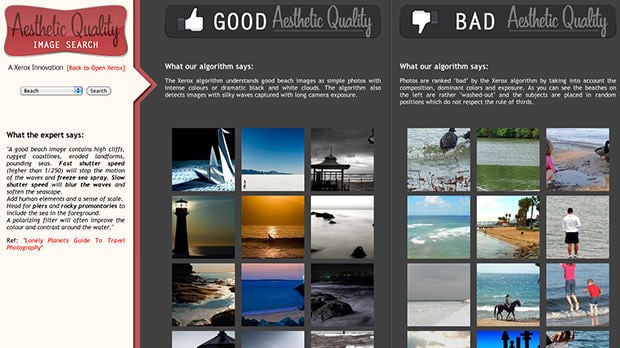 Xerox is showing off a new tool called Aesthetic Image Search over on Open Xerox (the Xerox equivalent of Google Labs). It’s an algorithm being developed at one of the company’s labs that aims to make judging a photograph’s aesthetics something a computer can do.

Many methods for image classification are based on recognition of parts — if you find some wheels and a road, then the picture is more likely to contain a car than a giraffe. But what about quality? What is it about a picture of a building or a flower or a person that makes the image stand out from the hundreds which are taken with a digital camera every day? Here we tackle the difficult task of trying to learn automatically what makes an image special, and makes photo enthusiasts mark it as high quality.

You can play around with a simple demo of the technology here. Don’t tell the Long Beach Police Department about it though — they might use it against photographers.