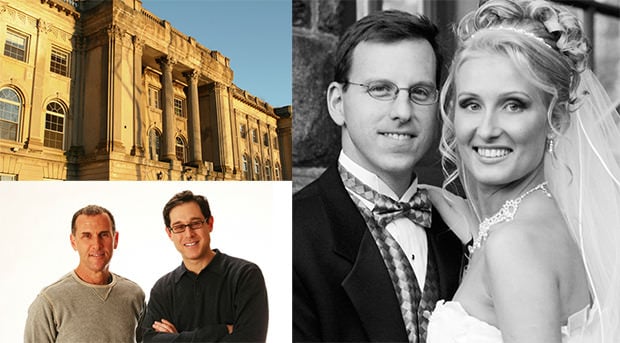 It’s not uncommon to hear stories of wedding photographers getting sued by unsatisfied clients, but one lawsuit currently underway in New York is causing quite a stir. Todd Remis (pictured on right) of Manhattan is suing 65-year-old studio H & H Photographers (on left), claiming that the photographers had missed the final 15 minutes of the wedding that included the last dance and bouquet toss.


However, there are details that make the case bizarre:

[…] what is striking, said the studio that took the pictures, is that Mr. Remis’s wedding took place in 2003 and he waited six years to sue. And not only has Mr. Remis demanded to be repaid the $4,100 cost of the photography, he also wants $48,000 to recreate the entire wedding and fly the principals to New York so the celebration can be re-shot by another photographer.

Re-enacting the wedding may pose a particular challenge, the studio pointed out, because the couple divorced and the bride is believed to have moved back to her native Latvia. [#]

Studio owner Dan Fried says that the cost of defending themselves in court has already matched the sum demanded by Remis, and calls the case “an abuse of the legal system.”