In 1505, Leonardo da Vinci painted a vast mural in Florence’s town hall titled “The Battle of Anghiari” — believed to be one of his greatest works. After being on display for more than 40 years, the unfinished painting was lost when the hall underwent renovations and new murals by Giorgio Vasari were added. There are no known records explaining what happened to the piece, but many people believe that it is currently hidden behind one particular mural called “Battle of Marciano in Val di Chiana”.

Photographer David Yoder began photographing this mystery for the National Geographic starting in 2007, and soon began looking for a way to photograph the lost painting through the existing mural. He’s currently attempting to raise $266,500 through Kickstarter to develop a camera to do this.

There are a number of clues suggesting that the legendary painting is still intact: first, in two other cases where Vasari covered works by other famous artists, he left them intact behind his new artwork. Second, the only words to be found in all of Vasari’s paintings in the building are found over where Leonardo’s painting was believed to be. The words — found on a green flag being waved by a soldier — read, “Cerca Trova”, which translates to “He who seeks, finds”. Finally, when scanning the building with a ground-penetrating radar, investigators discovered a thin gap behind the “Cerca Trova” painting — the only gap found throughout the whole building. 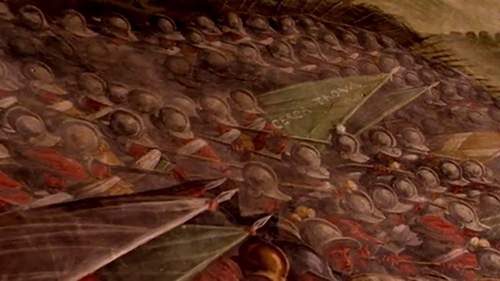 In his search for a camera capable of shooting through five and a half inches of brick and plaster, Yoder met Dr. Robert Smither, a physicist at Argonne National Laboratory and inventor of the copper-crystal mosaic gamma ray diffraction lens. Initial tests using the device were positive:

Using a particle accelerator straight out of a science fiction movie, the scientists recorded gamma ray signatures emitted from pigment samples that penetrated through the original bricks we had brought from the Palazzo Vecchio. The results were very encouraging; Smither’s technology should work well to detect, and even image, the painting, even through Vasari’s brick wall. [#]

Despite significant funding from National Geographic, Yoder doesn’t have enough funds for the gamma ray camera he needs. Thus, he has turned to Kickstarter to raise the quarter of a million bucks needed for the futuristic camera, with the money primarily needed for a portable particle accelerator and a germanium crystal detector that go into making it. He’s hoping to have the camera built by February 2012.

The Search for the Lost da Vinci (via NYTimes)