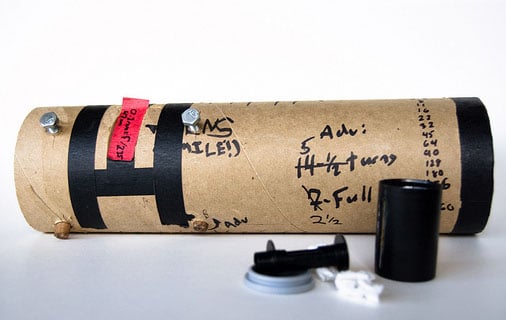 Mechanical engineer and Flickr user Some Guy (Art) was bored at his job where picture taking was explicitly disallowed, so he did what any rebellious photo-fanatic would do: build a makeshift camera out of trash! Bringing $5 worth of parts (e.g. dowels, bolts, super glue) from home, he successfully turned some machine core — which he calls “cardboard toilet paper tube on steroids” — into a 35mm pinhole camera.

Here’s a photo he “snapped” with the camera without the aid of a viewfinder, frame counter, shutter, or meter. Exposure time was 15 minutes:

I didn’t let on that it worked so well because I feared for my job, as picture taking was explicitly disallowed. I tried to avoid taking pictures of secretive things or names, so this is what I’m left with. I have a new job now, so I feel like I can post these without too much worry. I’ll still keep anything that looks sensitive or has printed names secret, but I have a camera made from garbage that I have proved can take pictures. [#]

Sweet MacGyver skills. He should get hired as a spy or something.

Image credits: Photographs by Some Guy (Art) and used with permission

Win Your Portrait Subjects Over with Genuine Enthusiasm