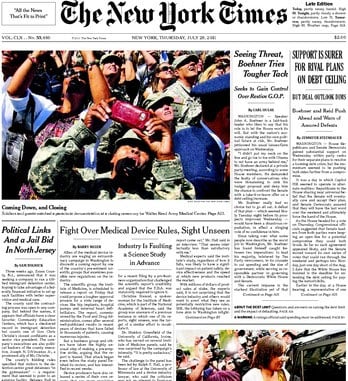 After Bang-Bang Club photographer Joao Silva lost his legs to a land mine in Afghanistan in October of last year, NYTimes executive editor Bill Keller stated, “He will be missed until — as I have no doubt he will — he returns to action, cameras blazing.” Keller predicted correctly — Silva has returned to work less than a year after suffering his horrific injuries:

[…] as the Times correspondent Sabrina Tavernise rushed uphill on Wednesday to cover the closing ceremony at Walter Reed Army Medical Center in Washington, she spotted a very familiar face in the crowd. Mr. Silva, wearing a T-shirt with the exclamation “Pow!” written across the front, was already on the scene. He was smiling. He was walking on his prosthetic legs. And he was taking pictures.

One of those photos, of soldiers and visitors watching a parachute demonstration during the ceremony, was chosen for Page 1 of The Times on Thursday. [#]

Silva tells the NYTimes, “It was a matter of making the best of what I had. There will come a time when I can run, but now I can walk.”

Back in Action and Back on Page 1 [NYTimes]

Portraits of Dogs as They Shake Off Water

How NASA Modifies the Nikon D2Xs DSLR for Space