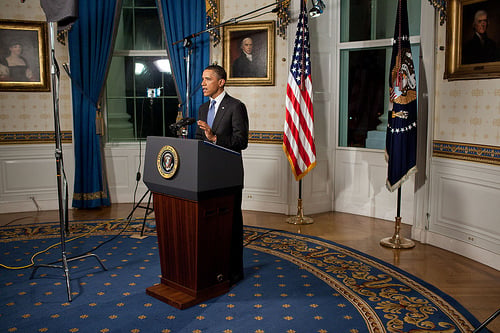 The White House announced last month that it would be ending the long-running practice of reenacting Presidential speeches for photographs, but stated that they were still working out how the new system would work. Last week it reached an agreement with the White House Correspondents’ Association — rather than reenacting photos for a larger group of photographers, a single photojournalist will be given permission to shoot future speeches as they happen:

[…] news photographers will now be permitted to designate a single representative to act as a “pool” for the entire press corps. The photos taken by the pool representative will be made available to all news organizations. Reporters use a similar pool system for presidential events in which space is limited. [#]

“Hey, no pressure, but the world’s media is depending on your photos!”