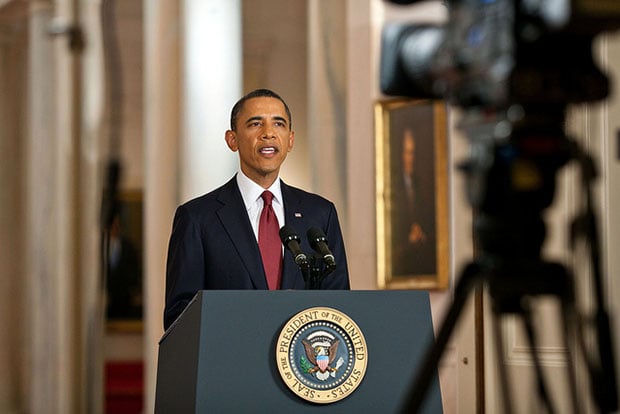 You might not know this, but virtually all of the still photographs you’ve seen in the press showing President Obama announcing the death of Osama bin Laden are staged photographs. Reuters photographer Jason Reed wrote an interesting behind-the-scenes blog post on Monday, explaining:

As President Obama continued his nine-minute address in front of just one main network camera, the photographers were held outside the room by staff and asked to remain completely silent. Once Obama was off the air, we were escorted in front of that teleprompter and the President then re-enacted the walk-out and first 30 seconds of the statement for us.

Apparently this has been standard practice during Presidential speeches at the White House for quite some time, and is meant to prevent the noise of camera shutters from interrupting the televised address. Despite the fact that news organizations try to disclose the nature of the photos in the captions, the fact that these photos are staged doesn’t sit well with some folks.


Photographer Chip Litherland writes in a post titled “history or his story?“:

I know this is a long standing tradition in the White House as to not let the camera clicking interfere with the message. It isn’t President Obama, and it dates back decades. Unfortunately, the message that is being sent when the cameras are clicking is being interfered with.

That is no longer an acceptable answer in my mind. It is falsifying history. What if – and just imagine – what if something were to happen during the re-enactment? Any slip of the tongue, a trip on the red carpet, a glance or subtle expression change all can dramatically alter what is real and what is news. It is going to take that kind of moment to change all of this staging of events. Essentially, the White House is determining what is history. What we see. What is real.

It is not history. It is his story.

Al Tompkins of the Poynter Institute shares a similar point of view:

It is time for this kind of re-enactment to end. The White House should value truth and authenticity. The technology clearly exists to document important moments without interrupting them. Photojournalists and their employers should insist on and press for access to document these historic moments.

The “technology” could be anything from shooting on the other side of a window to using a sound blimp on a camera.

In response to this ongoing debate, the editors over at the MSNBC photoblog have actually taken the bold step of refusing to publish reenacted photos ever again:

Having been prompted to think about this issue this week, our point of view is that there’s no reason for us to show pictures of a re-enactment when we can show you screen grabs of the actual address, even if we won’t have as much choice or image quality. Yesterday, we replaced still photographs we published from Sunday’s re-enactment with frame grabs from HD video, and will not use photographs of re-enactments on our site in the future.

What are your thoughts on this issue?

Update: The White House has announced that it’s putting an end to this practice.