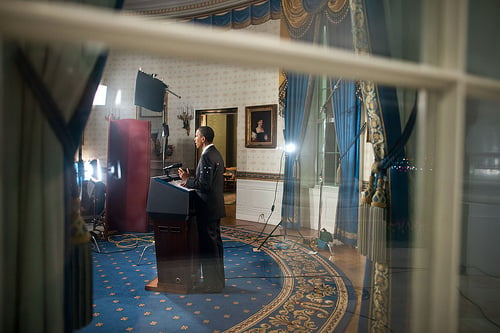 The White House is ending its long-running practice of reenacting speeches for still photographs after the controversy was rekindled last week by President Obama’s Osama bin Laden speech.

After Obama’s live, late-evening address from the East Room of the White House on May 1, five photographers were ushered in to shoot pictures as the president stood at the podium and re-read a few lines of his speech – a practice that news organizations have protested for years.

Even though The Associated Press and other news outlets said in captions to the photos that they were taken after the president delivered his address, many people who saw them may have assumed they depicted the speech itself. That raised questions of whether news organizations were staging an event. [#]

Today a spokesperson for the President stated, “We have concluded that this arrangement is a bad idea,” and that the administration is working on a new method for photojournalists to make photographs of actual speeches.