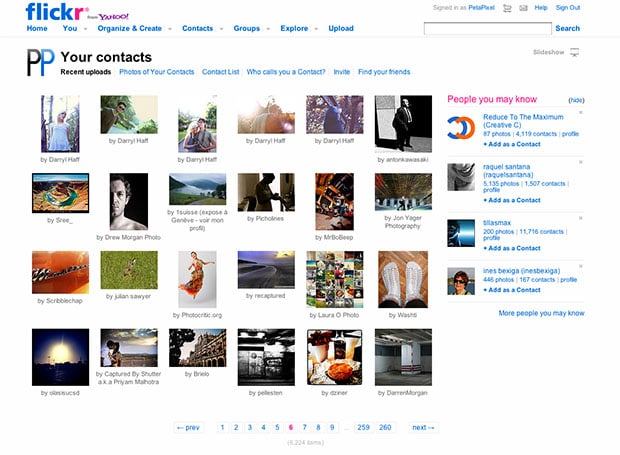 There have been a number of stories lately reporting that a large number of Flickr users are leaving the site for new photo-sharing services that are cropping up, including Instagram and 500px. Earlier his week, a designer at Flickr named Timoni West wrote a post on her blog that publicly criticized Flickr’s usability. More specifically, she calls the “Your contacts” page (the one that shows your contacts’ photos) the “most important page on Flickr”, pointing out the problems with the page and offering redesign ideas that would address them.

The page fails on a fundamental level—it’s supposed to be where you find out what’s happened on Flickr while you were away. The current design, unfortunately, encourages random clicking, not informed exploration.

The page isn’t just outdated, it’s actively hurting Flickr, as members’ social graphs on the site become increasingly out of sync with real life. Old users forget to visit the site, new sign ups are never roped in, and Flickr, who increased member sign-ups substantially in 2010, will forego months of solid work when new members don’t come back.

On the other hand, Timoni still believes Flickr can be a competitive player in the photo-sharing arena:

Flickr can have a serious competitive advantage if they make photo uploads easy to see and navigate: everybody likes photos, and likes seeing themselves in photos, and it’s even nicer to see photos all arranged on a page without visual cruft like status interruptions and article links. It’s also crucial to have different ways of viewing the photos: chronological is important, but so are groupings by date and contact type.

In other words, Flickr still has the ability to kick ass in this arena. They just have to build it.

If you’re a fan of Flickr, check out the blog post and see if you agree with the criticism she offers.

Trade-In Your Used Cameras at Amazon for Gift Cards