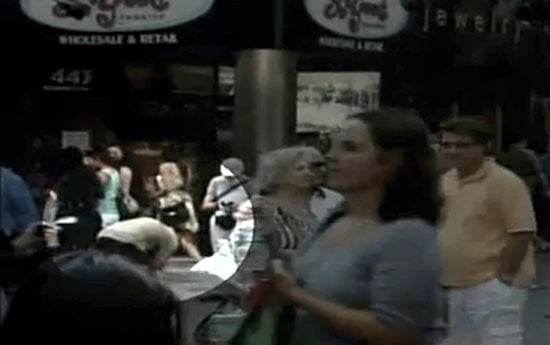 Boston news station WBZ-TV stirred up some controversy recently after airing a piece titled “Downtown Crossing ‘Street Photographers’ Crossing The Line?“. Apparently a viewer sent in some video showing a group of six or seven older men who regularly visit a particular crosswalk to photograph pedestrians on the street, saying that they see the men “aggressively hunting down and photographing women and children nearly every day”. The station then decided to air a piece and publish a story from this perspective, questioning the intentions of the photographers and quoting other pedestrians on the sidewalk disturbed by their behavior.

Here’s the short piece that aired (click here if you can’t see the video):

Again, it’s totally legal, but apparently the difference between what’s legal and what’s pervy is about as gray an area as you’re going to find in the public photography world. In a WBZ News tipster’s video, for example, one of these totally normal gents bends over behind a group of young women and snaps a picture of what the reporter describes as areas of bare skin. So, just some good clean wholesome photography fun going on in my state capital, is what it is.

One of the street photographers involved in the story responded to the story with a lengthy response, titled “WBZ Crosses the Line“.

The spot was heavily biased, and can serve as an excellent example of how news is created, how fact is distorted, and how WBZ got the story they set out to find. All by design. If this is what happens with a minor story about street photographers, imagine what happens with major news stories.

[…] Before I continue, consider this: a real predator would not have engaged the media to begin with. If we were truly part of a group that “aggressively hunts down women and children” we wouldn’t go to the same place almost daily. This is How-often-do-you-beat-your-wife? Journalism.

Finally, since when does taking a photograph of someone’s legs on the street automatically make a person a creep? Don’t get me wrong, I’m not trying to side with one side or another in this case. What I am saying is that biased reporting can turn public perception against a group of photographers who might simply be doing some legitimate street photography. What are your thoughts on this story and how it was presented?

The Pure Joy of Getting Your First DSLR