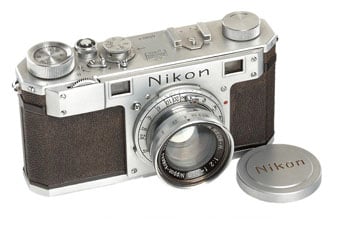 While Nikon Corporation was established in 1917 (as Nippon Kōgaku Tōkyō K.K.), the company was a lens manufacturing company and didn’t make the first Nikon branded camera until 1948. The first camera was named the Nikon I, and started with serial number 60922. On May 28th, Nikon I No. 60924 will be auctioned at the Westlicht Photographica auction. This is the third Nikon production camera ever made, and the oldest known surviving Nikon camera. Bidding starts at €70,000 (~$100,000), and the camera is expected to fetch up to €160,000 (~$230,000). Some lucky (and wealthy) camera collector is going to be the owner of a rare and beautiful piece of photographic history.

360° Lens Lets You Shoot Panoramic Video on the iPhone 4