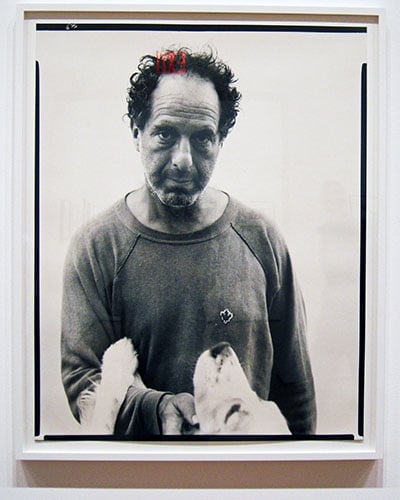 Being stopped by police for being suspicious — and having cameras — isn’t an issue unique to our time. In 1955, photographer Robert Frank was driving through Arkansas when he was stopped by a police officer who looked into his car and noticed, among other things, “a number of cameras”. The officer had something to take care of in a nearby city, so he conveniently had Frank held in a city jail until he could return and question him.

Here’s the police arrest report filed after the incident:

On or about November 7, I was enroute to Dermott to attend to some business and about 2 o’clock I observed a 1950 or 1951 Ford with New York license, driven by a subject later identified as Robert Frank of New York City.

After stopping the car I noticed that he was shabbily dressed, needed a shave and a haircut, also a bath. Subject talked with a foreign accent. I talked to the subject a few minutes and looked into the car where I noticed it was heavily loaded with suitcases, trunks and a number of cameras.

Due to the fact that it was necessary for me to report to Dermott immediately, I placed the subject in the City Jail in McGehee until such time that I could return and check him out.

After returning from Dermott I questioned this subject. He was very uncooperative and had a tendency to be “smart-elecky” in answering questions. Present during the questioning was Trooper Buren Jackson and Officer Ernest Crook of the McGehee Police Department.

We were advised that a Mr. Mercer Woolf of McGehee, who had some experience in counter-intelligence work during World War II and could read and speak several foreign languages, would be available to assist us in checking out this subject. Subject had numerous papers in foreign langauges, including a passport that did not include his picture.

This officer investigated this subject due to the man’s appearance, the fact that he was a foreigner and had in his possession cameras and felt that the subject should be checked out as we are continually being advised to watch out for any persons illegally in this country possibly in the emply of some unfriendly foreign power and the possibility of Communist affiliations.

Subject was fingerprinted in the normal routine of police investigation; one card being sent to Arkansas State Police Headquarters and one card to the Federal Bureau of Investigation in Washington.

Luckily Frank didn’t allow this incident to deter him from his work — three years later he published his magnum opus, The Americans.

Fujifilm Finepix X100 Next to the Leica M3

Life as a Photographer on Capitol Hill