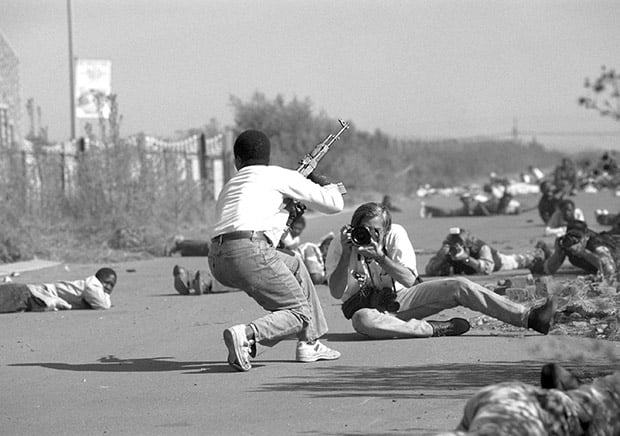 If James Nachtwey were a street photographer, he wouldn’t be the type to stand on the opposite sidewalk and stealthily capture unsuspecting strangers using a telephoto lens. As you can see from the photograph above, Nachtwey has a fearless attitude when shooting in dangerous situations, getting up close and personal with the subjects.

The photo is from a documentary titled “War Photographer” by Christian Fei, which was nominated for an Academy Award (Best Documentary Film) in 2002. The film follows Nachtwey for two years as he documents conflicts in Kosovo, Rawanda, Indonesia, and the West Bank.

Regarding what motivates him, Nachtwey reflects,

Why photograph war? Is it possible to put an end to human behavior which has existed throughout history by means of photography? The proportions of that notion seem ridiculously out of balance yet that very idea has motivated me.

Here’s a short scene in which Nachtwey “philosophizes on photography’s importance and responsibility to humanity”:

An interesting technique used in the film is the microcam video camera mounted on Nachtwey’s SLR, giving the viewer a “photographer eye” view of scenes as Nachtwey captures them.

To hear more from Nachtwey, you should also watch the talk he gave at TED 2007.