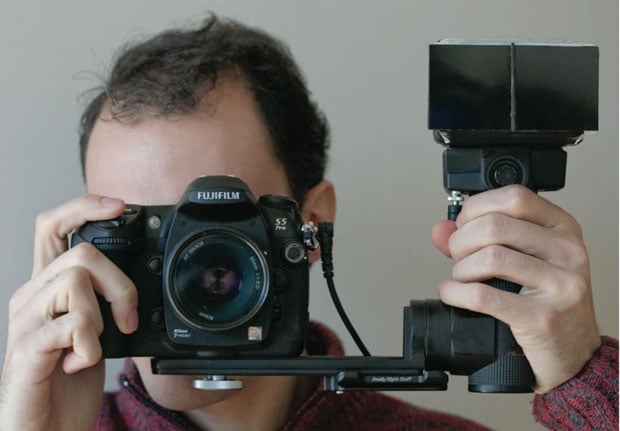 Future generations of photographers may one day look back and wonder why we often blinded each other with painfully bright flashes of light for the sake of proper exposure.

NYU researchers Dilip Krishnan and Rob Fergus are working on a dark flash that eliminates the “dazzle” effect of regular flashes in a low-light room. They’ve created this camera rig that combines common infrared photography techniques with an ultraviolet flash that produces a dim purple glow instead.

The team placed an infrared filter on the lens of the Fujifilm S5 Pro, which is has a modified CCD sensor that specializes in IR and UV photography. To supplement existing UV light, the team created a modified filter on an external flash to emit only UV and IR wavelengths.

Still, the project has a few hitches. The image produced strips all normal colors out, and all subjects turn a sickly green color. The image requires heavy color correction. In order to reintroduce correct wavelengths of color, the photo has to be combined with a regular photo of the image captured in ambient light — merged similarly to HDR photography. Obviously this is a huge obstacle since photos of objects and people in motion is impossible. 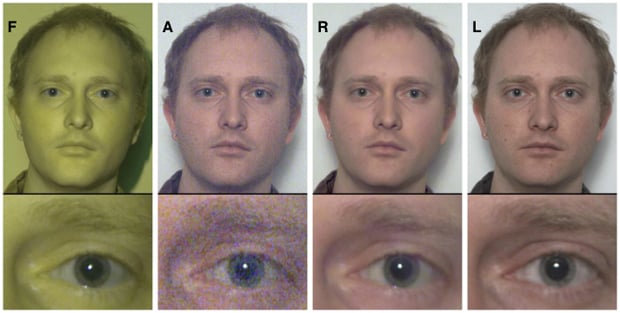 The above photos are the photos take with the UV flash (F), with ambient light (A), the composite image (L) that combines the UV and ambient, and finally, a long-exposure image of the same scene for comparison (L). It’s pretty close, though some texture detail is lost, but it looks less grainy.

The techniques used are nothing new — photographers have been using IR flash to shoot in situations that require subtlety for years — but combining IR with UV is a pretty nifty idea. It will be some time before applications like this are practical — but perhaps they could become more useful if they used stereoscopic lenses common to 3D cameras to take two photos at once.