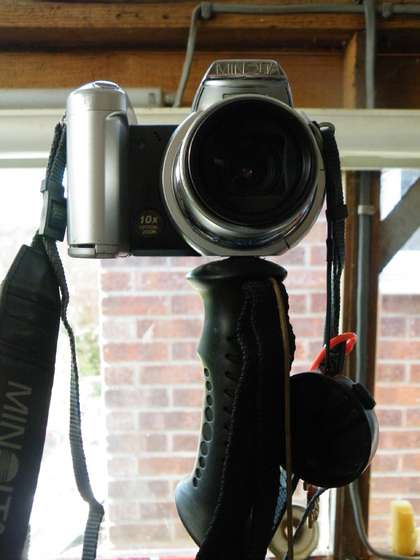 My boys have started getting into photography, but often have trouble keeping the camera still enough for really clear shots.

The obvious solution is to buy a mono-pod, but why buy when you can make, especially when you have Sugru? 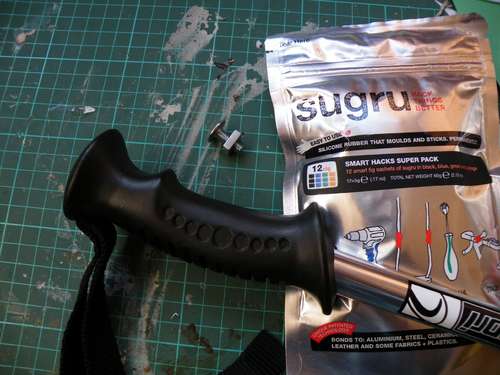 Materials: I used a cheap aluminium walking pole (which I already had), a quarter-inch diameter bolt, a few centimetres of 2mm paracord and a 5g “Smart Hack” sachet of black Sugru. 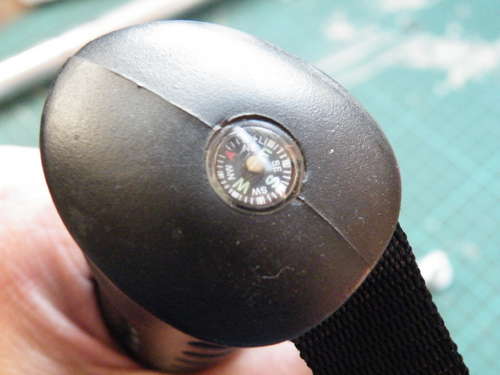 The walking pole had a small, unreliable compass built into the top. I prised it out with my knife, ready to widened and deepen the hole to take the bolt.

This revealed a small cross-head screw, which I wasn’t expecting. 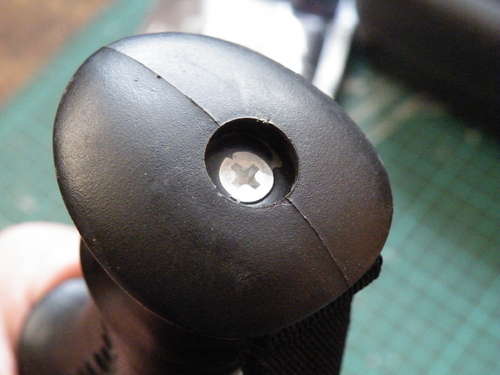 I removed the screw, and the wrist strap fell out of the slot in the side of the handle. Oops (more on this later).

I fitted my rotary tool with the bit that looks like a dentist’s burr, set the tool to its lowest speed to avoid melting the plastic, and started digging.

I realised that the plastic of the handle was quite flexible, so I avoided making the hole any bigger, furtling around inside the hole instead, widening the hole beneath the surface to take the head of the bolt. 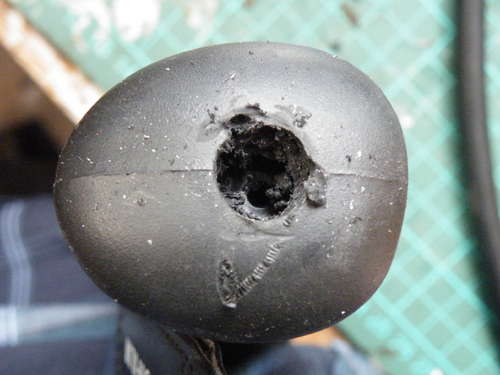 When it was deep enough, I forced the bolt-head sideways through the entrance to the hole, then it popped into place. 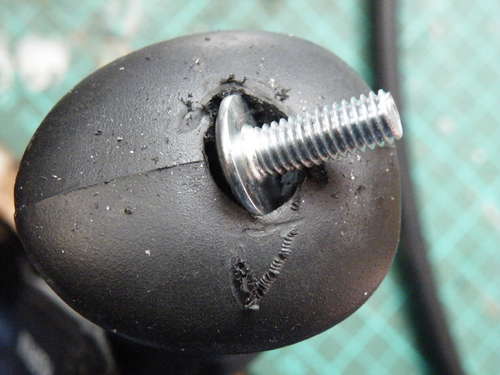 Step 3: Back to the Oops 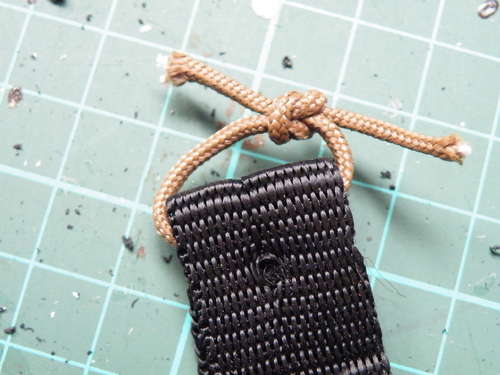 Remember how the wrist strap fell out?

I couldn’t put the screw back to hold it in, so I knotted a small loop of paracord through the strap, pushed it back into the slot from whence it fell, and then pulled the loop over the top of the bolt, using the pliers of my Leatherman. I also threaded a second loop of paracord into the slot and over the bolt, but this time I left a long piece of the cord hanging out to fasten stuff to later. 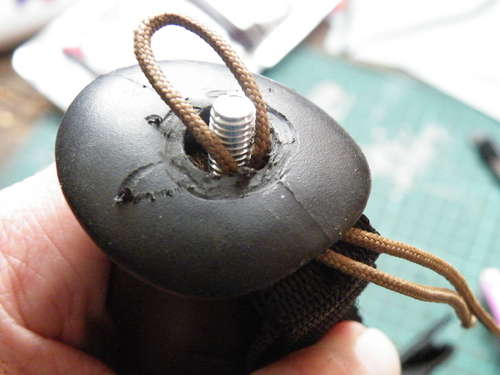 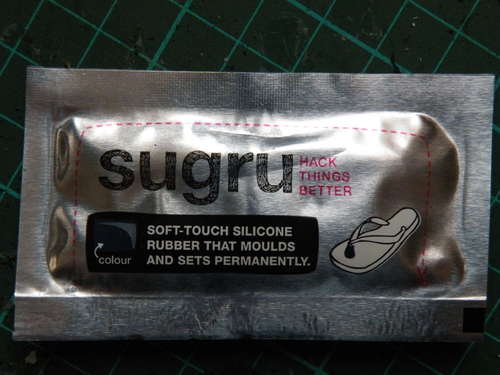 I’d never used this stuff before, but it just may turn into my favourite specialist material. 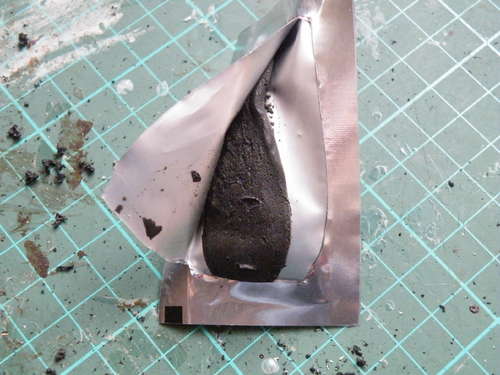 I used about half the blob (5g sachet of the black Sugru) to fill and pack around the bolt. Despite starting off quite clammy and sticky, it proved surprisingly easy to mould and shape.

A small jeweller’s screwdriver proved very useful in scraping the un-cured Sugru from the exposed threads of the bolt, and as a tiny rolling pin to smooth off the worst of my thumb prints.

The other half of the Sugru became a safety cap – I embedded the nut in it, and then inserted the loose end of the paracord in it to prevent loss. I knotted the end of the cord to make it less likely to pull out of the cured Sugru later.

The screwdriver again proved useful, pushing the Sugru back up the hole in the nut and out of the threads. 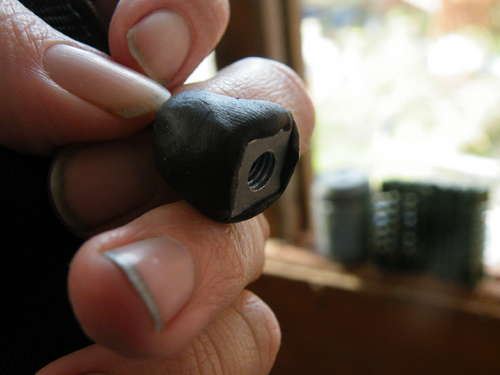 Sugru doesn’t set instantly. The packet says a 3mm thickness takes 24 hours to cure, and parts of this are easily twice that thick, so I left the mono-pod for two full days before attaching the camera properly.

The cured Sugru felt very like the original rubber of the handle, and is closer in colour than it looks in the photos. The finished mono-pod is not as rigid as I hoped (which may be because I did not pack Sugru all the way down the hole), but it works, which is what I needed. 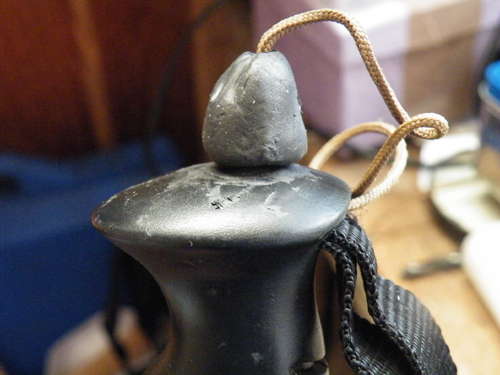 I’ve got to say, I’m impressed with my first experience of Sugru. I wonder what I can do next?

About the author: Mark Langford is a Teacher, Maker and Birdwatcher based in the UK. Browse his other projects at Instructables.