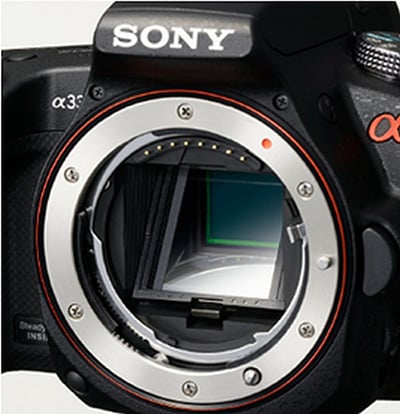 The above is supposedly a leaked photo of the not-yet-announced Sony A33 and its pellicle mirror, the first of its kind on a DSLR. Rumor has it that the camera will officially be announced early tomorrow morning.

SonyAlphaRumors received a tip that Sony will be using the following arguments promoting the new pellicle system:

Stay tuned. Official news about the A33 and A55 should arrive shortly.

Update: Amateur Photographer just published a post titled, “New Sony Alpha 55 and Alpha 33 EVF DSLRs to feature fixed Translucent Mirror“. Almost as soon as it was published it was taken down (darn those easy-to-click “Publish” buttons!). Here’s a quote from the now-removed article:

Sony is set to introduce shooting speeds of up to 10fps, as well as video, in its latest Alpha DSLR cameras, the Alpha 55 and Alpha 33, by using a new non-moving ‘translucent’ mirror. Echoing the technology of the pellicle mirror in Canon’s EOS RT of 1989, Sony’s new semi-transparent mirror allows light to be fed simultaneously to a camera’s imaging sensor and AF system, removing the need for a moving mirror and providing the potential for much improved focus tracking as well as active AF in Live View and video modes.

How to Order $3 Million in Camera Gear

Sony Alpha A33 and A55 Official: First Translucent Mirror DSLRs