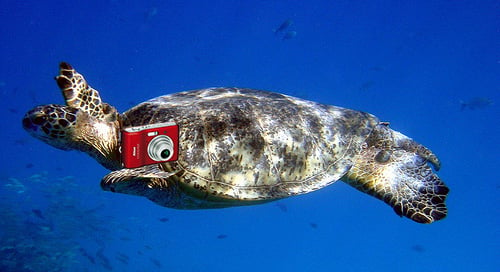 On May 16, Coast Guard investigator Paul Shultz was walking along a Key West, Florida marina when he came across a red Nikon L18. Although the underwater housing surrounding the camera was battered from what appeared to be a long period at sea, the camera was in tip top shape.

After finding nothing in the photos and videos on the memory card that pointed to the owner, Shultz turned to the Internet, posting the photos to Scubaboard.com. Within days, it was determined from clues in the photos that they were taken in Aruba, about 1,100 miles from where the camera was found. The clues included a plane’s tail number that revealed that the plane was in Aruba the day the photo was taken, a blue roof that was located on Google Maps, and a school poster written in Dutch (Aruba is a Dutch island).

Once the camera’s origin was known, Shultz published the photos to Aruba.com. Within two days a woman recognized the children in some of the photos as her son’s classmates and, after contacting the family, the mystery was solved.

Dick de Bruin, a sergeant in the Royal Dutch Navy, was salvaging an anchor from the USS Powell for a WWII memorial when his camera floated away. One way or another it ended up 1,100 miles to the north and into the hands of Paul Shultz.

An interesting part of this story is that among the things found on the memory card was a video recorded by a sea turtle that dragged the camera for a period of time during the journey. The shaky video has amassed hundreds of thousands of views on YouTube:

This story is similar to one we reported on in February, where a camera was returned to the owner after spending a year on the ocean floor.

Looks like “photo in a camera” is the new “message in a bottle”.

(via The Associated Press)