News agency Reuters is being accused of biased reporting after it was discovered that photographs released by the agency had critical elements such as daggers, blood, and injured soldiers cropped out. The story originally broke on Little Green Footballs over the weekend. 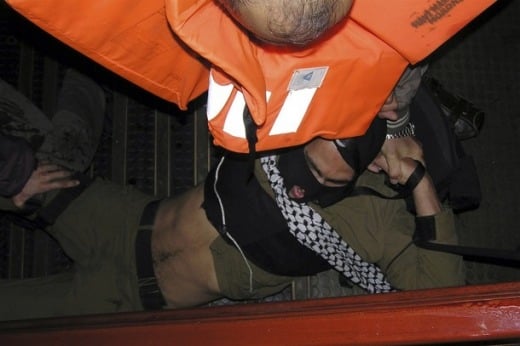 Inspection of the original photograph reveals that three important elements were cropped out of the photograph. The first is the second injured soldier in the upper right hand corner, the second is the knife being held by an activist, and third is the large pool of blood on the wooden railing. Here’s another photograph released by Reuters: From looking at the original photograph, we see that a knife was cropped out of this one as well: Reuters is no stranger to controversy, as there have been quite a few cases where photographs were retracted, with the subjects ranging from Middle East conflicts to the recent volcano eruption in Iceland.

Reuters has responded to this latest controversy on their blog, saying:

The images in question were made available in Istanbul, and following normal editorial practice were prepared for dissemination which included cropping at the edges. When we realized that a dagger was inadvertently cropped from the images, Reuters immediately moved the original set, as well.

Reuters has also published a series of non-cropped photographs of the raid in a slideshow.

What are your thoughts on this controversy? Do you think the daggers were “inadvertently” cropped from the images, or is this a case of biased reporting?

Camera+ is the Latest “Ultimate” Photo App for the iPhone