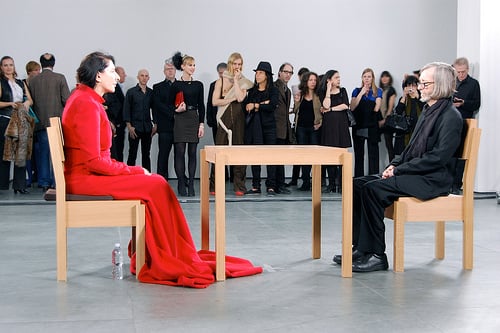 There’s some serious artiness going on over at MoMA. Artist Marina Abramović has a new performance called “The Artist is Present” that involves her sitting silently across from museum visitors. The show runs from March 14 to May 31 and, with the exception of a few days, Abramović sits from before the museum opens and continuously through when the museum closes. MoMa also provides a live stream of her performing.

So how does this have anything to do with photography? Photographer Marco Anelli has been creating portraits of the participants for MoMa and uploading them to a MoMA set on Flickr. Below each portrait is also the length of time that person sat in front of Marina. At the time of this writing, there have been 759 fascinating portraits uploaded. Most people participating sit in front of Abramović for anywhere from a few minutes to an hour. One woman sat there for a whopping six and a half hours.

There’s also a good number of people with teary eyes, whether from the stress of sitting and staring, or from being moved emotionally somehow through the performance: 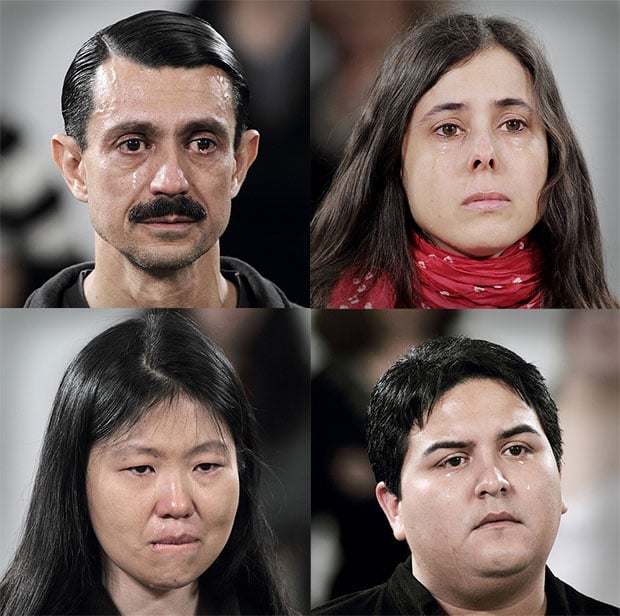 Wikipedia has a description of a previous performance Abramović did with her ex-boyfriend Ulay ( pictured here):

To create this “Death self,” the two performers devised a piece in which they connected their mouths and took in each other’s exhaled breaths until they had used up all of the available oxygen. Seventeen minutes after the beginning of the performance they both fell to the floor unconscious, their lungs having filled with carbon dioxide. This personal piece explored the idea of an individual’s ability to absorb the life of another person, exchanging and destroying it.

For more on this performance, check out Jason Kottke’s coverage in which he documents interesting happenings (including an appearance by Lou Reed).

Image credit: Marina AbramoviÄ‡, The Artist Is Present, 2010 by 16 Miles of String