Even if you’ve never heard of Peter and David Turnley, you’ve likely seen at least one of their photographs at some point in your life. The identical twins are two of the most renowned photojournalists to have covered world events over the past few decades. The video above is a fascinating 13-minute-long feature titled “Double Exposure,” which aired on 60 Minutes back in 1996 (warning: there are some strong images of violence). 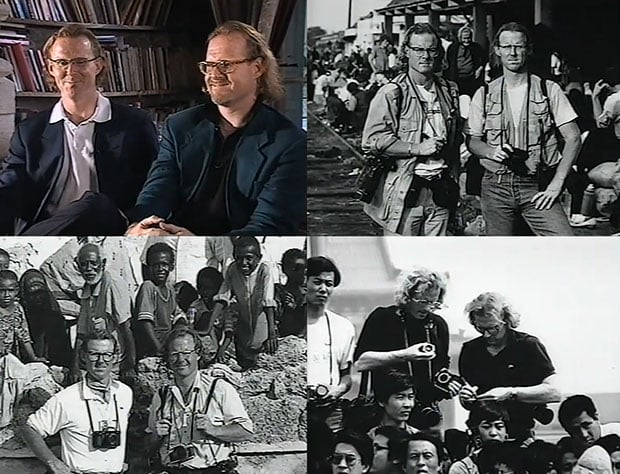 Here’s what Wikipedia says about the two brothers:

Peter Turnley is a photojournalist known for documenting the human condition and current events. Over the past two decades, he has traveled to eighty-five countries and covered nearly every major news event of international significance. His photographs have been featured on the cover of Newsweek more than forty times. A renowned street photographer who’s lived in and photographed Paris since 1978, Turnley is one of the preeminent photographers of the daily life in Paris of his generation. [#]

David Turnley is an American photographer. He won the 1990 Pulitzer Prize for photography for images of the political uprisings in China and Eastern Europe, the World Press Photo Picture of the Year in 1988 for a photo taken in Leninakan after the devastating Armenian earthquake and again in 1991 for a picture of a U.S. Sergeant mourning the death of a fellow soldier during the Gulf War, as well as the Overseas Press Club Robert Capa Gold Medal. He has been a runner-up for the Pulitzer Prize in photography four times. [#]

The photography gene is strong with these two.