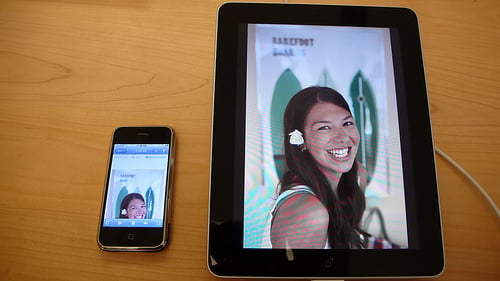 As more and more people are ditching compact cameras for their camera-equipped phones, it’s clear these hybrid devices will be playing a big role in casual imaging in the years to come. One of the leaders in this space is the Apple iPhone, which boasts countless applications that improve and customize the photography that can be done with it.

Some recent events have shed a little light into the direction Apple may be headed.

The first clue is a recent job posting on Apple’s website with the job title “Performance QA Engineer, iPad Media”:

The Media Systems team is looking for a software quality engineer with a strong technical background to test still, video and audio capture and playback frameworks. Build on your QA experience and knowledge of digital camera technology (still and video) to develop and maintain testing frameworks for both capture and playback pipelines.

Given that the iPad does not currently offer any kind of photo or video capture, this suggests that camera(s) may appear in the next iPad.

Furthermore, Electronista is reporting that sensor corp OmniVision may play a role in future Apple devices:

OmniVision executives today gave JP Morgan analyst Paul Coster hints that they may have deals for cameras in next-generation Apple devices. After a discussion, Coster understood that ‘top-tier smart phone companies’ would move from three-megapixel cameras to five in the second half of the year. He added that OmniVision was “well-positioned” to provide camera sensors for both the new iPhone and even the next iPad, which in its initial form doesn’t have any cameras.

At the beginning of the year, we reported that OmniVision had developed a 14.6 megapixel sensor for cell phones that is also capable of high-definition video recording.

The iPad is a bit to big to be a carry-around point-and-shoot replacement, so any camera that appears on it might be more geared towards video chatting, while we might see the quality of iPhone photography skyrocket in the near future.