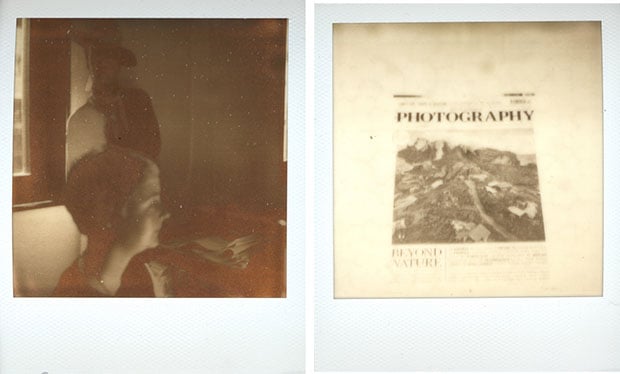 The Impossible Project’s new instant film for Polaroid cameras will go on sale later this week, but the British Journal of Photography has already gotten their hands on a pack of PX100. They were mailed a comprehensive press kit that included a box of the black and white film, and promptly exposed the film with a SX-70, publishing the results on their blog.

Of the eight exposures they had to play around with, only a few of them produced semi-recognizable images. Olivier Laurent writes,

But my initial impressions are that PX100 behaves like a expired pack of 669 or Time-Zero. You’re never sure of what you will get. To be fair, Impossible did warn us about this during its press conference yesterday. A slight change in temperature or pressure can ruin or enhance your image. One thing is sure, do NOT use this film outside in the winter or early spring, when there is still a cold breeze. Also, in some situations, you will need to keep your ND filter on.

Apart from some disappointing results (especially when shooting outside), it feels good to load a SX-70 with some new film.

$21 a pack means this is some seriously expensive experimentation. However, lets wait until the film is in the hands of the masses before coming to a verdict on this new film. Here’s to hoping the film is a success!