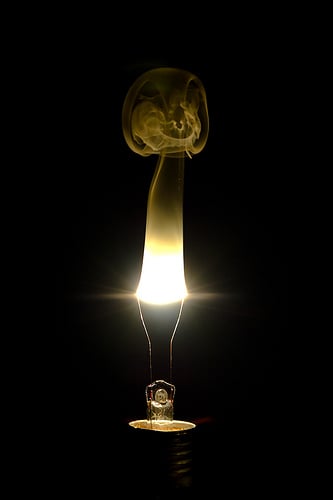 Photographer Jon Beard has a terrific set of photos called “Burning Bulbs” in which he breaks lightbulbs and photographs them with the filaments exposed.

The set includes the following photograph, titled “1UP Mushroom“: 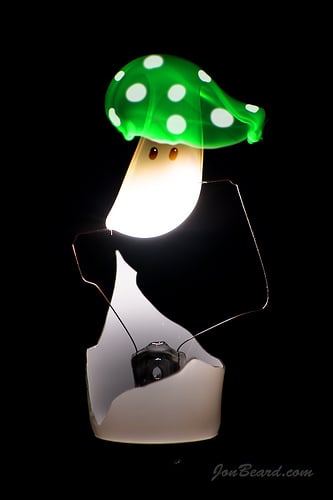 I’m a photographer and computer guy from the mountains of Virginia. My favorite kind of shot is one that gives a person a new perspective. Whether it’s a far away landscape, an unusual angle on something familiar, or a close-up of an everyday item, if it changes the way they see the things around them, it’s a success.

The idea for the 1UP came while going through shots from a broken bulb series I had shot with the intention of adding color. When I saw that one, the mushroom shape was undeniable and as a lifelong gamer all I could see was green with white spots.

DIYPhotography has a great tutorial on how to shoot this kind of photograph, but Beard also created a great behind-the-scenes video tutorial showing us his process:

If you decide to try out this idea, please be very careful – both electricity and glass can be hazardous to your health.

This project is similar to the Exploding Lightbulbs that Shatter Water tutorial that was posted here a while back by guest author James Davidson.

Image credits: Photographs by Jon Beard and used with permission.