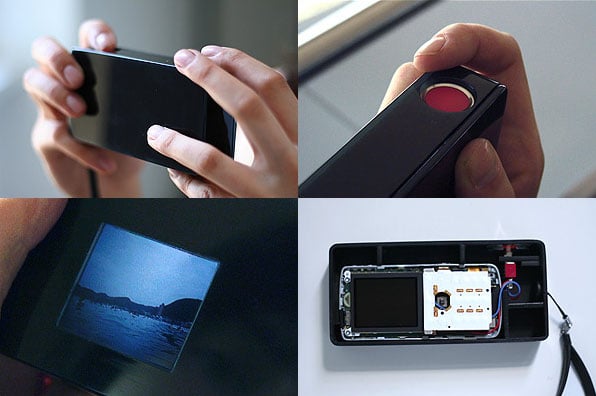 Buttons is a concept camera by Sascha Pohflepp that lacks traditional camera functionality. Rather than taking photographs, it displays photographs that other people took at the moment you pressed the button. Pohflepp explains,

Buttons takes on this notion of the camera as a networked object. It is a camera that will capture a moment at the press of a button. However, unlike a conventional analog or digital camera, this one doesn’t have any optical parts. It allows you to capture your moment but in doing so, it effectively seperates it from the subject. Instead, as you will memorize the moment, the camera memorizes only the time and starts to continuously search on the net for other photos that have been taken in the very same moment.

Essentially, it is a camera that – using a mobile communication device – takes other’s photos. Photos that were created by someone who pressed a button somewhere at the same time as its own button was pressed. Even more so, it reduces the cameras to their networked buttons in order to create a link between two individuals.

So how does it work? Flickr, of course! The SonyEricsson K750i inside the device contacts a server that searches Flickr for photographs taken at the requested moment. As soon as a match is found, it is transmitted to the “camera” and displayed on the screen. The press-to-view process could take a “few minutes or hours”.

Time-Lapse of the Milky Way over Hawaii