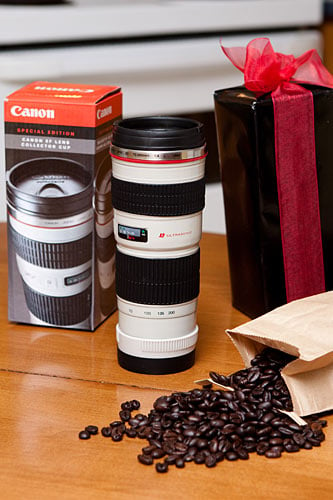 The web has been abuzz the past couple days over the collectible L-lens look-alike coffee mugs Canon was passing out at the Olympics. Everyone is asking whether they’ll be available to the general public.


One of our readers, Chris Wilkinson, has sent in photos of the Canon EF Lens Collector Cup he actually purchased from a local camera store in Canada. He tells us,

I saw the photo via Petapixel’s link to PDNPulse, so I emailed the photo to Carsand Mosher in Truro, Nova Scotia. A store I’ve purchased every piece of photo equipment to date, and they know my obsession with Canon branded promotional items. The subject line was “Just one question” the body was “Can you get this:” and the mug photo in the body of the message.

To my delight, The reply was “Yes…and I thought of you when I saw those this past Monday. We ordered some, and we have a sample here fresh in the box. They will sell for $29.99 (cad). A few minutes later, another reply came in that they have two samples on hand. I bought both. One for use, one that will remain wrapped for my collection. They arrived in the black gift wrap complete with the red ribbon, perhaps cleverly imitating the red ring. These samples may have been special, or maybe even an add-on from my camera shop. Either way, I can’t see the regular stock wrapped in black paper and a ribbon.

Wow. If these things actually go on sale to the general public for $29.99 CAD (currently about $29.13 USD) I’m sure there going to sell like hotcakes. Here’s a video Chris uploaded showing his mug:

PDN Reporting the Opposite

Don’t get your hope up TOO much though. PDNPulse is reporting that the mugs may not be available anytime soon:

Despite rumors that the mugs would be offered as free swag to those attending the WPPI Convention in Las Vegas next week, a Canon spokesperson tells us they were created by Canon Canada solely as a giveaway to photographers at last month’s Winter Olympics in Vancouver.

They also received another photograph of the mug from Josh Weisberg of Microsoft: 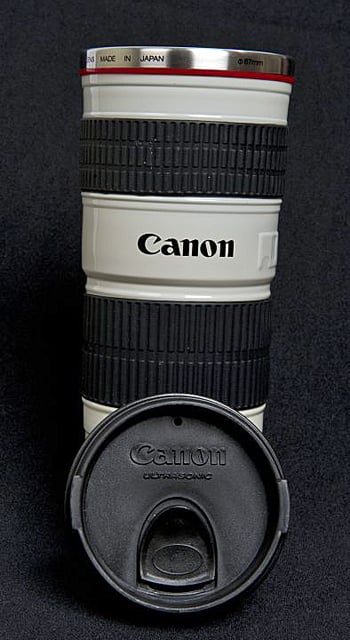 DSLR News Shooter is doing a giveaway for a… 24-105 coffee cup? We’re not sure how real this is, but the photographs they have in the post sure look real: 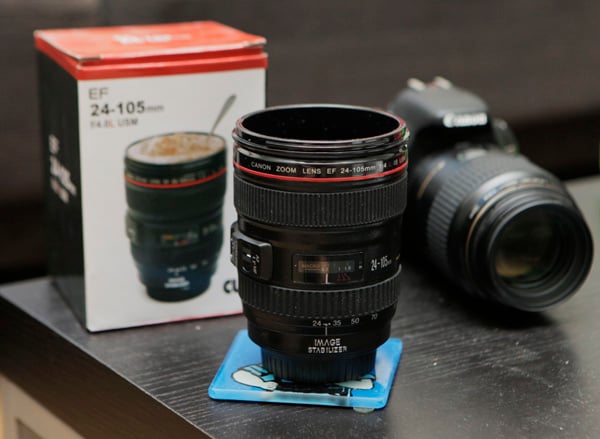 They’re asking that you register on their site with your name and email, and then leave a comment on the post for a chance to win the mug.

How much do you want one of these things? If one of them was being auctioned on eBay, how much would you bid?