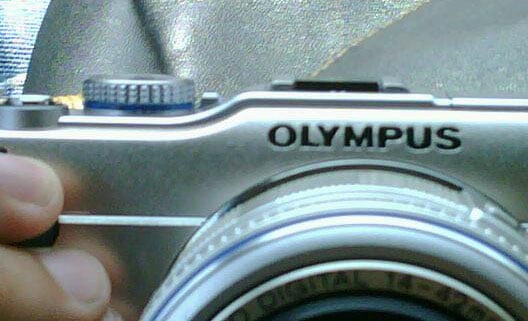 Last week Olympus began running a teaser for what appears to be a new camera that will shortly be announced. The teaser featured a mysterious image of a camera hidden behind a hand, and a form for collecting emails to be contacted immediately at launch.

From what can be seen of the camera in the teaser, it’s pretty clear the new camera will be part of the new Micro Four Thirds system of cameras, which features DSLR-quality imaging in more compact bodies due to the omission of a mirror and optical viewfinder system.

A few hours ago 43rumors reported that a leaked image (shown at the top of this post) of the new Olympus camera had appeared on an Asian forum. Though the image was removed within minutes, a reader had already saved the photo and emailed it into 43rumors.

Comparing the leaked image and the teaser, it appears the cameras are the same. The leaked image shows a 14-42mm lens, while the lens appears to be different in the teaser (43rumors states it’s a 17mm). We’ll probably learn more about this camera at PMA 2010 next month.