Victor Pinchuk, the Ukrainian billionaire who purchased the photograph 99 Cent II Diptychon in 2007 for a record breaking $3.34 million, has launched an international award for artists called the Future Generation Art Prize.

The biennial prize awards $100,000 to a young artist under the age of 35. Anyone who meets the age requirement can apply online through the award’s website. Once the nominations have been received, 100 art experts from all over the world each select 2-5 candidates. From there, another selection committee reviews the resulting 200-500 entries and selects 20 artists for an exhibition. The winner will then be selected from the exhibition.

Pinchuk, who is 49, has only been collecting art for five years, but has ranked among the most active collectors during that time. Though he will not take part in selecting the winner of the prize, the prize stipulates that the finalists must include the winner of a separate Ukrainian award that he established. One of Pinchuk’s goals through his museums and awards is to establish Ukranian capital city Kiev as one of the cultural hubs of the world. 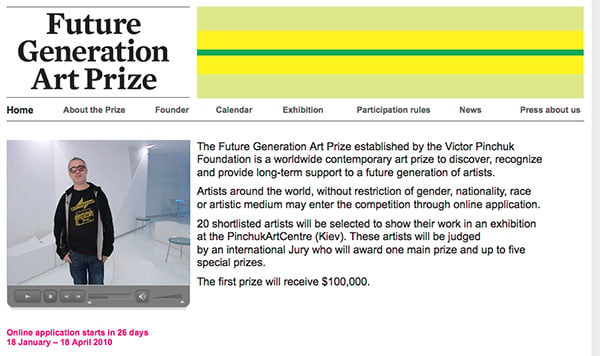