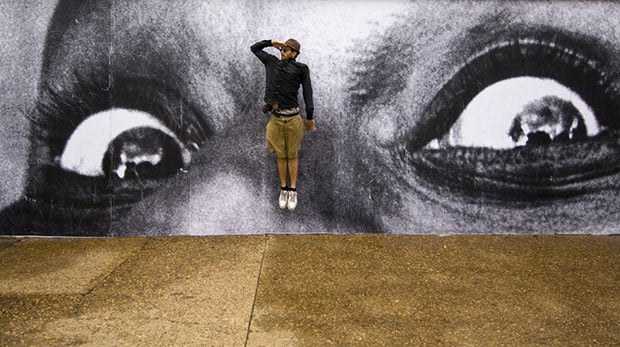 The TED conference announced yesterday that the 2011 TED Prize would be awarded to the anonymous street artist and photographer known as JR. Previous winners of the $100,000 award include Bill Clinton, James Nachtwey and Bono.

In the announcement, TED writes,

JR creates pervasive art that spreads uninvited on buildings of Parisian slums, on walls in the Middle East, on broken bridges in Africa or in favelas in Brazil. People in the exhibit communities, those who often live with the bare minimum, discover something absolutely unnecessary but utterly wonderful. And they don’t just see it, they make it. Elderly women become models for a day; kids turn into artists for a week. In this art scene, there is no stage to separate the actors from the spectators.

The 27-year-old prints massive portraits on waterproof vinyl, and displays them prominently in slums, drawing attention to the neglected residents of those downtrodden areas. He also reinvests most of the money he makes from his art into future projects — one of his pieces went for more than $35,000 in 2009 — and plans to do the same with his TED Prize winnings. Artist Shepard Fairey calls JR “the most ambitious street artist working“, while French journalist Fabrice Bousteau wrote that JR is “the one we already call the Cartier-Bresson of the 21st century”.

To see photos of some of JR’s creations, check out his website.

Award to Artist Who Gives Slums a Human Face (via dvafoto)

A Brief History of Nikon Cameras in Space

How to Convert a Cheap Digicam into a Night Vision Camera