Editor’s note: Whenever I see a hummingbird, I always want to shoot a low depth of field photograph of it, but I’ve never been able to. Thus, I was pretty impressed when I came across this photograph of a hummingbird in flight in our Flickr group pool, and asked David if he would write this guest post teaching PetaPixel readers how to photograph hummingbirds. 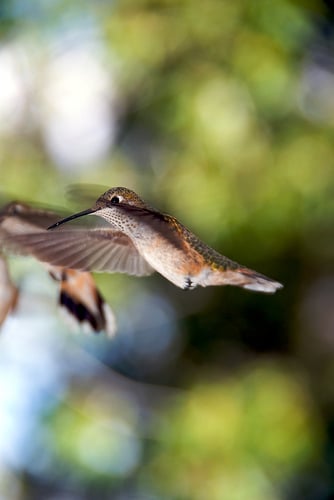 Pictures involving things that move are not always easy to come by. Pictures involving wild animals can be problematic. And getting a picture of a flying bird? However, sometimes you can make the opportunity happen. Such was the case a couple of weeks ago when my girlfriend noticed hummingbirds at our feeder. Perfect!

I didn’t use any fancy equipment or tools, other than a rickety step ladder that happened to be handy. And truly, the stepladder isn’t all that important, so if you don’t have one, that is not a problem. All you truly need is your camera (my own camera of choice is a Pentax K10D) and some patience.

You also need hummingbirds. If you are lucky enough to live in an area where they are, you’re in business. Just hang up a feeder to attract them if you haven’t already done so. However, as you do this, think hard about two things. The first is making sure that you place the feeder such that the birds will use it, and the second is making sure you have a good line of camera sight to it with an acceptable background. However, since we are, hopefully, going to leave the entire background out of focus, look more for areas of color than details in the background. 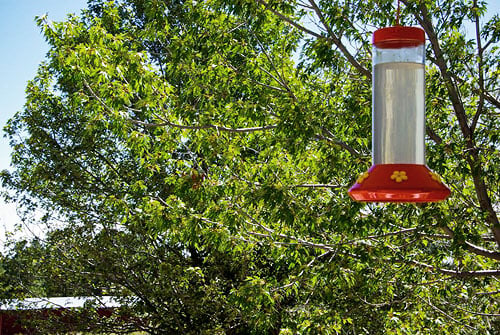 For us, we hung the feeder on our front porch. This gave me a very fine place to wait, gave the birds lots of excellent flying room, and provided a wonderful background of green trees and blue skies. The other great thing about the location is that although it let the birds fly as they will, it constrained their flight ever so slightly and gave me the final tool I needed: a predictable approach to the feeder.

My goal was to capture a hummingbird in flight, so I didn’t want anything really distracting in the picture—like, for example, the actual feeder or anything in the background in focus. I really wanted was just the hummingbird.

Also, because of my porch, I needed a bit more extra light to bring out all the details of the hummingbird. I popped up my onboard camera flash—no groans, please! It was all I had at the moment and it came through. Equipment at hand is often the best equipment there is and always beats having nothing. 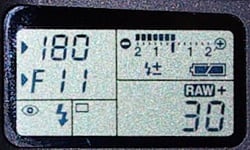 My final camera settings were 1/180 at f/11, using a 250mm lens at about 4 feet with my on-camera flasht. Yes, the depth of field was tight, but not impossibly so. Best of all, the background was wonderfully out of focus and provided some really nice bokeh. I fired off a couple of test shots and inspected them. My camera allows me to enlarge the picture on the LCD screen, so I did that to be extra certain of the focus.

I wanted the picture to be more of a “from the side” picture, rather than “below, shooting up” picture, so I used my stepladder. This wasn’t the best of all supports, especially since it is rickety (to be charitable to it) and my girlfriend was ready with her camera for when I fell off (alas, she was disappointed in not getting that action shot). I sat patiently at the top of the stepladder (Photo below by Mary Beth McClean). 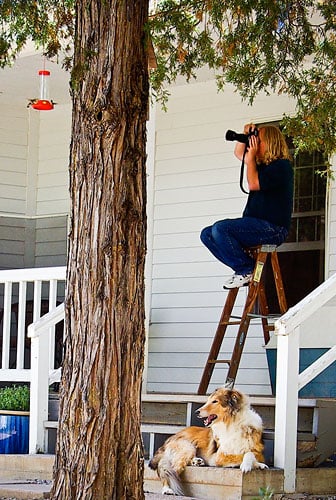 After a short while the hummingbirds started coming to the feeder. I sat there first and simply studied them and watched, which was something quite enjoyable. At that point, I realized that even if the picture didn’t come to be, I had a wonderful time watching…and no matter what that alone made it enjoyable. I actually just watched them for a good while, observing what they did–how did they approach the feeder? How did they land? How long were they on the feeder? What did they do when they took off? What side did they favor?

It didn’t take long to realize that many of the birds followed a pattern. They would fly in fast to the feeder, but then, a couple of feet away from it, pull up for a moment and hover for a very brief time before heading straight to the feeder. This was to be my window of opportunity and I pointed the camera to where they often hovered, making sure the feeder was not in the frame. Since I was using manual focus the camera did not attempt to refocus—perfect. All I could see through the viewfinder was the background—again, perfect.

That’s how I did it. I simply waited until the bird I wanted (a very nice looking male) followed the pattern, and gently pressed the shutter release when he hovered for a brief moment. Presto! Even though the flash went off, the bird, amazingly, didn’t seem to mind, and went straight on to the feeder. In the end I managed several good shots. 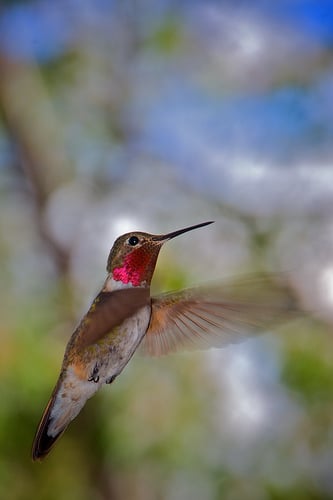 The key to my success with this photo wasn’t anything fancy—rather, it was taking advantage of a situation I found, being patient, and observing. Once I discovered there was a pattern, it became a matter of waiting and watching. It didn’t take all that long, and all the while I was able to take the shot I wanted, rather than chasing the birds all over the place.

Although we can’t always get Mother Nature to do our bidding, she does help us along. All we have to do is be sensitive to her rhythms and patterns.

About the author: David lives just outside of Albuquerque, New Mexico and is considered armed and dangerous when he has a camera. Mostly dangerous. You can view more of his work on Flickr. He still talks about the “shot that got away” but is optimistic he will get it next time.

Celebrating with a Lensbaby Giveaway!