Update: This giveaway is now over. The winners were randomly selected and announced here. Thanks to everyone who participated!

One of the tools I occasionally bust out during post-processing is Noise Ninja, a noise-reduction program/plugin used by seven of the ten largest newspapers in the United States.

Take this photograph I took yesterday as an example: Though I was shooting outdoors with plenty of light, I had accidentally left my ISO set at 1600. This caused the photograph to end up looking dirty and full of noise. In addition, I underexposed the photo, giving it even more noise after correcting the exposure during post-processing.

You can hover over the above image to see the image after using Noise Ninja on it.

Don’t see much of a difference? Maybe a crop of a smaller area of the frame will help you see what Noise Ninja does (hover over this before image to see the after image): 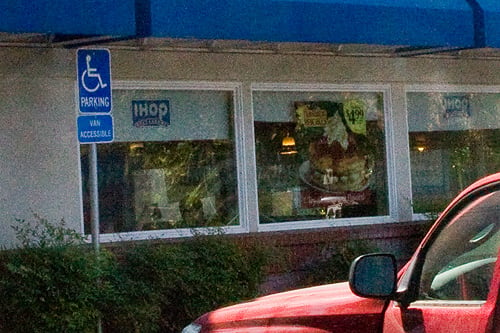 Neat, huh? The amount of noise in the photo was significantly reduced, even before tweaking and selectively editing the image. For some more before-and-after examples, visit the gallery on the PictureCode website.

I’m giving away three (3) Noise Ninja Pro Bundle licenses, each worth $79.95. These bundles include the Photoshop plugin, the Aperture plugin, and the standalone program. All you need to do to enter this giveaway is answer the following question:

If you could turn into any animal, which animal would you choose?

There’s two ways you can tell us your answer, and feel free to use both ways:

This giveaway will end next Tuesday morning, on August 25th, 2009. We’ll be picking the winner randomly using random.org. As usual, in addition to the winner we’ll post some of the more creative or interesting responses we receive.

PictureCode is not (currently) a sponsor of PetaPixel. They were simply nice enough to provide us with these licenses for us to give away to you, our awesome readers.

Update: Just learned that I had accidentally posted the deadline as September 1st, or a week later than I intended. Fixed it to read August 25th. Thanks for catching this @scottnopants!