Here’s an unprocessed portrait I took a couple days ago. 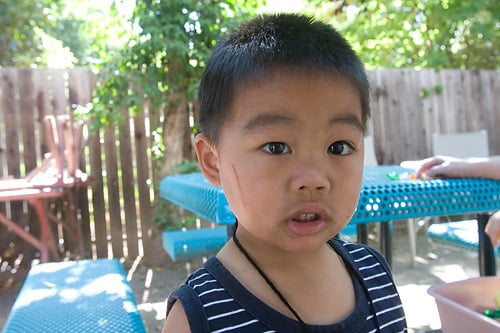 I’m going to show you how I would go about post-processing this particular portrait of a child.

First, a little about the shot: it was taken at ISO 1600. Big mistake. I was constantly moving between indoors and outdoors, so dropping the ISO slipped my mind. If I had gone down to something like 800 or 400, I could have reduced a lot of noise and obtained stronger colors.

I was also being lazy and shooting in Program mode. If I had shot it wide open at f/2.8, the background could have been thrown out of focus more.

The sun was somewhere overhead behind the child, and there was a wall directly behind me, which was bouncing a good amount of light into his eyes. Eyes that lack any sparkle often appear dull, two-dimensional, and lifeless.

Anyhow, the portrait was very candid and wasn’t set up at all. Now, onto post-processing: 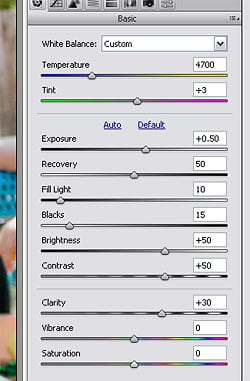 First, I open up the photograph in Adobe Camera Raw, and make the following adjustments:

White Balance: Upped the temperature from 4200 to 4700 to bring a little warmth back into the shot. The As Shot looked too cool.
Exposure: +50 to expose the shot a little more. If the background was completely blown out, I would have left this untouched to avoid too much clipping back there.
Recovery: +50 to recover many of the clipped areas in the background and a few areas in the foreground. (tip: toggle clipping indication with the U and O keys).
Fill Light: +10. This adds a little more “light” to the shadow areas of the shot, but also reduces contrast, since it turned many of the darkest areas into gray.
Blacks: +15 to set the darkest of the gray areas into true black, recovering a good amount of the black we lost through the Fill Light slider.
Brightness: Left unchanged.
Contrast: Upped this to +50 to make the photograph more contrasty. The original was pretty flat.
Clarity: +30. For photos with slightly blown out backgrounds like this one, I like to increase clarity a little to add a little more contrast to areas like the tree leaves.
Vibrance: Left untouched. After the previous steps, the photograph seemed saturated enough.

Also sharpened the photo a little and added some vignetting (about -50 for amount with midpoint at 25).

This is the resulting JPEG that Adobe Camera Raw spit out after making the above modifications (hover over it to compare it to the unprocessed version): Finally, I give the kid’s eyes a little boost in brightness. There’s lots of ways to go about doing this, but usually I like to use the masked curves adjustment layer technique I learned from David over at chromasia.

Here’s the resulting photo after I boost the eyes (hover over it to see what the eyes boost did): 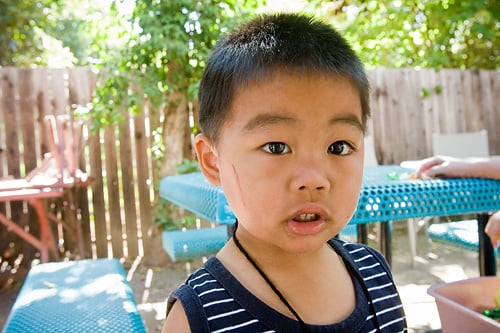