One of the results of always carrying around my camera is that I end up with a lot of portraits of my friends. I had lunch with a few of my buddies last Sunday, and snapped this photograph while waiting for a friend: I was using a Canon 40D and Canon 16-35mm with the following settings:

Instead of using a higher focal length and backing away from my friends, I decided to go ultra-wide and move in close. This caused the closer friend (Joseph) to be much more prominent, even though they were both sitting close together. If I had used a longer focal length and backed up, my friends would have been more flattened out, and Joseph would have been featured less prominently in the photograph. Thus, going wide and moving in close to a particular person when taking a group photograph can really help to make a photo more dramatic. 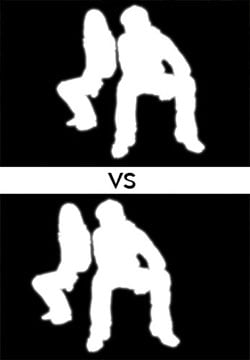 As with most portrait shots, I focused on Joseph’s eyes before recomposing the shot. I also wanted to make sure that my main subject wasn’t directly in the middle of the frame, and that the two bodies subject balanced out.

I think if I had framed Joseph directly in the center, the fact that my other friend (Anna) was looking directly at the camera as well puts too much action on the left side of the frame, and too much empty space on the right side:

If there was only one friend in the shot, I would have pushed him more to the side, since there wouldn’t be another pair of eyes to work with.

I guess this breaks the rule of thirds if you consider both subjects as one entity, like in the silhouette to the left, but with the way this photograph was set up I think it worked to have the main subject closer to the middle and another subject a little to the side.

Another thing I chose to do was get down very low. Notice how they’re sitting on a pretty low bench, yet I’m still taking the photograph from below their eye level.

Now regarding post-processing, I first opened it up in Adobe Camera Raw and made the following edits: 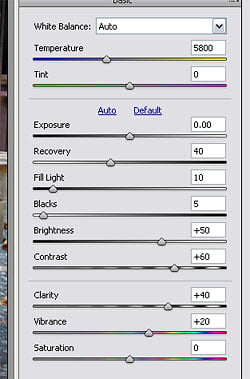 White Balance: Auto. It was decent and auto fixed it up by making it a tiny bit warmer.
Exposure: Left it unchanged.
Recovery: Anna’s white clothes were clipped in certain areas, so I upped recovery to get the detail in those areas back.
Fill Light: Added a splash of fill light to make the shadow areas a little less pronounced.
Blacks: Left this unchanged.
Brightness: Left this one unchanged as well.
Contrast: Increased to 60 to recover some of the contrast lost in previous steps, and to just increase it a little in general.
Clarity: Increased to 40 to bring out some detail in places like the bright clothes and the texture of the pillar.
Vibrance: Increased to make the colors pop a little more.

I also did the basic increase in sharpening, and added some vignetting to bring more attention to the subjects. These were all just pretty basic edits that I also step through when processing my RAW photographs.

Here’s how it turned out after modifications in Adobe Camera Raw (hover over it to compare to the unedited version): 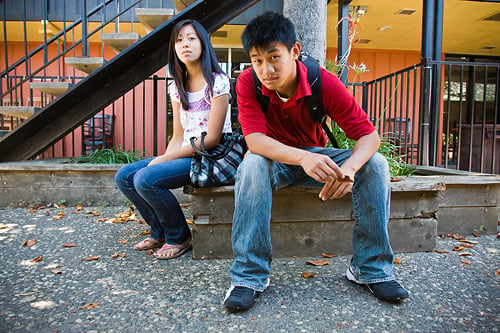 This is where I would normally be done with an image like this. However, suppose I wish I had used a wider aperture to have a shallower depth of field (i.e. if I had used f/2.8 rather than f/5.0). Obviously I can’t go back and reshoot, but what I can do is fake the depth of field in Photoshop. I might go into more detail into how to do this sometime in the future, but I’ll just briefly describe it now.

First, I duplicate the layer to make a blur layer. I use Filter->Blur->Lens Blur for the blur. Then I use the following mask on this blur layer to selectively choose where to add blur and where not to (hover over it to see the blur layer. Might take a few seconds to load): Here’s the resulting image with the fake depth of field added (hover over it to compare it to the unedited photo. Hover over this link to compare to the non-blurred version.): 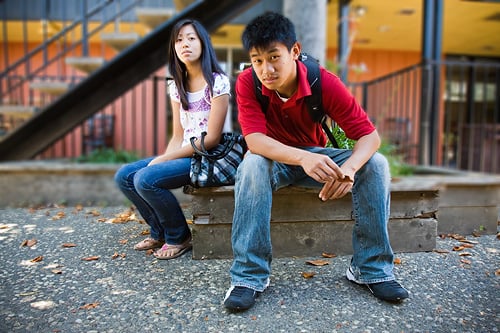 I hope this was an interesting and informative walkthrough. Leave a comment if you have any questions, suggestions, or tips!

Interview with David Nightingale of Chromasia