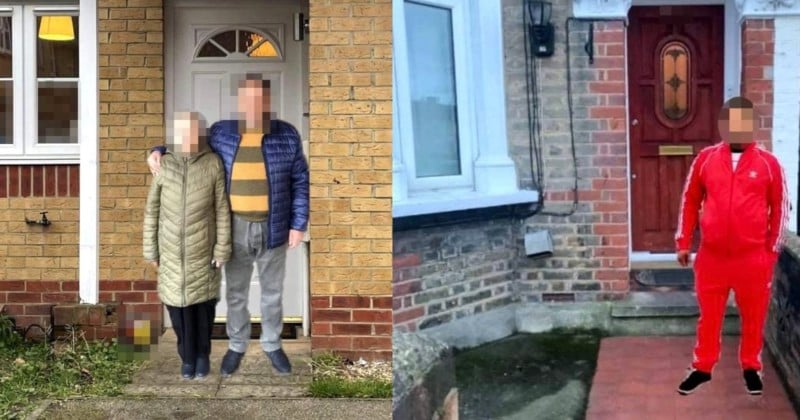 British authorities are receiving badly Photoshopped pictures by fraudsters who are claiming welfare while living abroad.

According to a report by The Times of London, digital forensic analysts have had to become more skilled at spotting edited photos as Photoshop becomes the go-to-method for fraud.

In one example, the Department for Work and Pensions (DWP) became suspicious of a man who they believed was living abroad while claiming welfare in the U.K. So they asked him to take a photo of himself by his front door.

Upon receiving the above photograph, it became evident that he had Photoshopped himself into the image.

As well as a fairly obvious digital cut-out around the man’s outline, a Google Street View camera was visible in the reflection of the car outside. The Google copyright logo can also be seen in the picture in front of the bin.

Another photograph above shows a man crudely cut out and superimposed on an image of his “home”.

In another Photoshopped picture below, a woman can be seen holding a baby on a street. However, her feet do not touch the ground.

A photo of a green door that appeared in several pictures submitted for welfare claims was also traced back to Pinterest.

The Widespread Use of Photoshop

With more people needing financial support during the COVID-19 pandemic, there was an increase in welfare claims in the U.K.

However, this also led to an increase in fraudulent claims, with criminals using Photoshop to take “advantage” of a relaxation of the rules on applications.

“During the last two years the team have received thousands of manipulated and constructed documents to try and pursue claims whilst being abroad,” a DWP digital forensic analyst tells The Times of London.

“Once this pattern is identified, the fraud officers very quickly share this intelligence with other offices across the country to make sure that if any more of these photographs are supplied that they know are part of the same batch of claimants.”

In the U.K., lawmakers have been increasingly using photography as a means to solve criminal investigations.

In December, PetaPixel reported on how a plot to send $54 million worth of drugs to Australia was busted by U.K. authorities after one of the criminals sent a photograph of his French bulldog to a friend.

Image credits: All photos by Department for Work and Pensions (DWP).