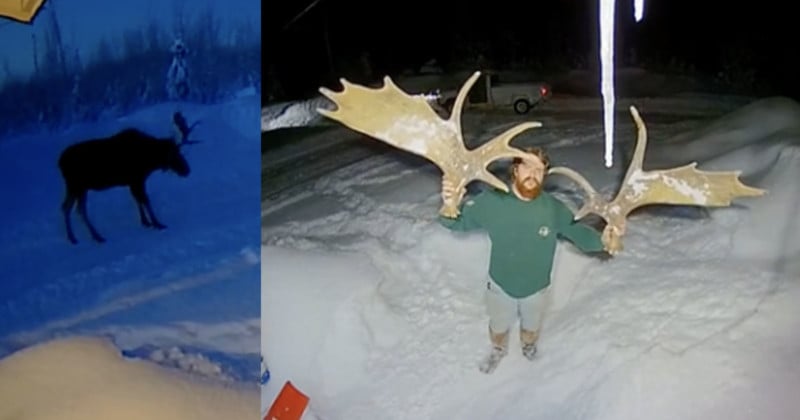 A Ring doorbell has captured the moment a moose sheds both its antlers, a “one in a million” occurrence.

Tyra Bogert was out of the house when she got a notification from her Ring camera that there was motion outside her house. Amazingly, she witnessed the moose shedding in real time.

The moose walks slowly into the frame from the left-hand side when it stops for almost 30 seconds, pondering its next move.

Then it begins to shake its entire body and as it does so, both of its antlers fall to the floor spooking the moose and causing it to run away.

“He scared the crap out of himself, that’s for sure, he took off running the other way,” Bogert tells Alaska’s News Source.

In a second video posted by Bogert, her husband Chance brings the enormous antlers up to the Ring doorbell camera and displays them in all their glory. Put together, the antlers measure 51 inches wide.

The video was captured in Alaska and while it’s not uncommon for moose to shed their antlers, they do so every year, it is rare for both of them to fall off at the same time and extremely rare to be caught on camera.

Why Do Moose Shed Their Antlers?

When a moose sheds its antlers it loses a lot of weight as it does so. All members of the deer family shed antlers, including its biggest member; the moose.

Only male moose have antlers and their growth is regulated by testosterone, according to National Geographic.

The antlers can weigh up to 60 pounds, it is literally a weight off their shoulders. The moose sheds its antlers in winter months so that they can store more energy over the cold spell.

It’s the second time in a week that a doorbell has captured something extraordinary in Alaska.

Last week, PetaPixel reported on a doorbell recording a huge meteor streaking across the Earth’s atmosphere visible from the Last Frontier.

While doorbell cameras remain controversial, at least they are recording events that are normally impossible to get.

Image credits: All photos by Tyra and Chance Bogert.