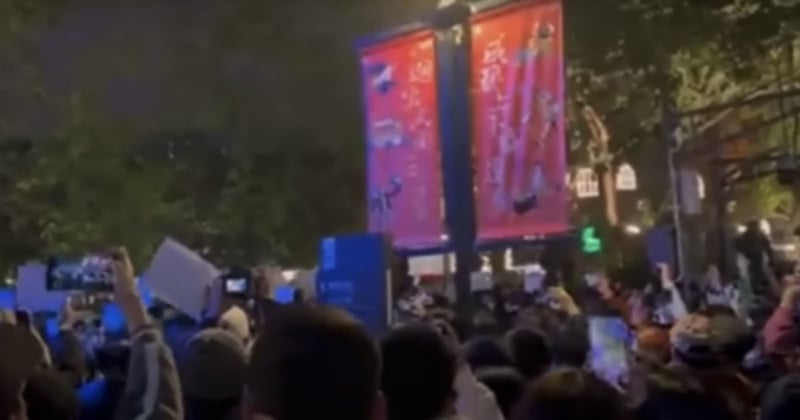 Chinese protestors angry with endless COVID restrictions have been flipping videos filmed on their phones and adding filters to avoid the government’s online censors.

Ultra-rare protests broke out in cities across China last week, chaotic scenes show a sea of smartphones held up to record the dramatic events.

But to get those videos online, users must avoid the government’s censors who want to prevent any sign of disobedience from reaching social media networks.

China’s censorship apparatus is the most sophisticated of its kind in the world and deletes countless posts on social media of the protests.

To get around the automatic blockers, savvy users have been flipping videos on their side to confuse the algorithm. Other creative techniques include using filters or recording videos of the videos.

In an article for The Sunday Times, author Ian Williams describes it as a “game of cat and mouse.”

“Images are exchanged via tools such as AirDrop…though Apple inexplicably limited the use of AirDrop in its latest update for China, drawing criticism that it is censoring on behalf of the Communist Party,” Wiliams explains.

The New York Times reports that a further challenge to the censors is a growing number of Chinese people using VPNs to gain access to sites like Twitter and Instagram, which are blocked in China.

Last week, PetaPixel reported that police in Shanghai and Beijing have been searching phones for Western social media apps like Telegram and Twitter. The former has been particularly popular to exchange images and information on.

Some have even taken to the messaging services of dating apps, which face less scrutiny.

China’s budget for domestic security is bigger than that for national defense. The Ministry of State Security oversees the government’s surveillance operation with the Cyberspace Administration of China policing the internet.

The censorship operation makes the full extent of the protests unclear, but videos of people sarcastically singing patriotic songs, holding up blank pieces of paper, and lighting candles around a vigil for those who died in a fire while in lockdown all got past the state inspectors.

Last Monday, PetaPixel reported how a senior BBC cameraman was arrested and beaten up while covering anti-lockdown protests in Shanghai.