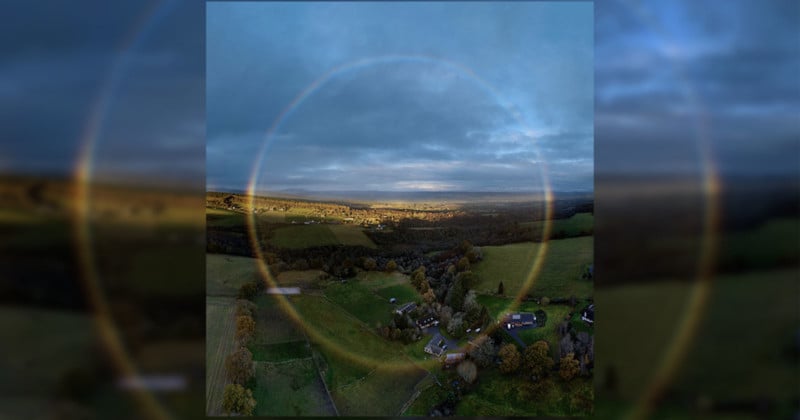 A photographer captured an ultra-rare full circle rainbow by using a drone to take multiple photos which were later stitched together.

Nick Sidle was up at the crack of dawn on Saturday in the Scottish Highlands when he encountered the beautiful rainbow.

However, Sidle tells PetaPixel that he didn’t realize it was a full circle rainbow until his drone was 45 meters (150 feet) in the air.

“It’s something I had never seen or had the opportunity to photograph before,” he says.

“Being able to see the full circle of a rainbow is a very rare event requiring water droplets in the atmosphere at low levels, the sun at a low angle, and a significantly raised viewpoint above ground level.

“This is most often from an aircraft. But a high building or a drone can be enough to reveal the beauty of this exceptional sight.”

In fact, there are very few photos of full circle rainbows. Partly because it is very difficult to plan for them.

“The occurrence is so rare and the conditions and alignments required so defined that it is probably only possible by taking advantage of an opportunity when it presents itself,” Sidle adds.

Sidle brought his DJI Mavic 3 with a DJI RC Pro controller to Glen Convinth, Inverness-shire. Due to the apparent closeness of the rainbow, the main camera on the drone could only picture a portion of it at a time.

“There was the possibility of moving back with the drone but that’s not quite as predictable in its effect with a rainbow compared to a solid structure, back would have to be a long way and, more importantly, there was a cloud moving so that it could obstruct the sun at any second,” he explains. Instead of risking losing the rare opportunity, Sidles decided to hold position and climb to the maximum permitted altitude while taking multiple images of the rainbow.

“From a height of 395 feet [120 meters], a series of photographs were made. I used 22 of them for the finished picture produced using ‘Photomerge’ in Photoshop. RAW DNG images from the camera on the DJI drone were used,” he says.

The Scottish Highlands is among the most breathtaking landscapes in the world and is home to a wealth of wildlife.

The weather can be gloomy but also notoriously changeable. The conditions can offer up amazing photographic opportunities.

“For a photographer of the natural world, it is one of the major destinations and opportunities. Even better is if it is where you are based,” adds Sidle.